Ancient City of Pingyao Posted by sasha on May 6, 2014 in Culture

For those interested in Chinese history and culture, a great place to visit is the Ancient City of Pingyao (平遥古城 – píng yáo gǔ chéng), located in central Shanxi province (山西 – shān xī). Although the small city of the same name will be of little interest to travelers, the old town is a fantastic UNESCO World Heritage site, listed as “an exceptionally well-preserved example of a traditional Han Chinese city.” 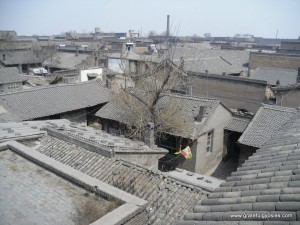 A view of Pingyao from above.

In fact, many consider the ancient walled town to be the best of its kind in China. Here’s a quick guide to this great town, with plenty of pictures and a few videos: 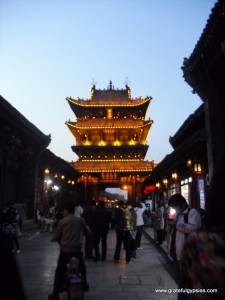 One of the four main towers lit up at night. 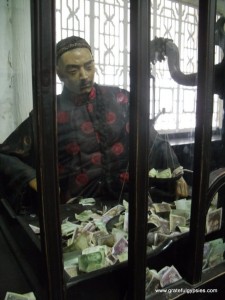 Inside the ancient Rishenghcang exchange house.

Pingyao was established way back in the 14th century when its city walls were constructed during the Ming Dynasty. Throughout the Ming and Qing dynasties, Pingyao was actually the financial center for all of China. At that time, Shanxi merchants had developed various trade routes both in China and abroad, and carrying their silver coins with them everywhere they went wasn’t exactly safe. As such, the first exchange house in the country was established in Pingyao. Called a piaohao (票号 – piào hào) in Chinese, these institutions provided remittance services, took deposits, and made loans. The first one was called “Sunrise Prosperity” ( 日升昌 – rì shēng chāng), and at its peak it controlled almost half of the Chinese economy. There’s even a movie, titled “Empire of Silver” (白银帝国bái yín dì guó) that tells the story of a banking clan in Pingyao during these boom times. 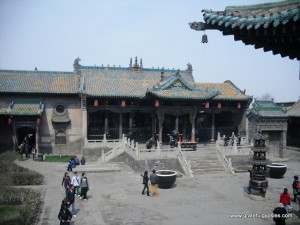 These days, the old city wall still stands, as do thousands of the traditional shops, dwellings, temples, and more. In an effort to preserve this historical and cultural gem, motorized vehicles are not allowed on the old cobblestone streets. While much of China’s history has met the bulldozer to make room for high-rise apartments and shopping malls, the ancient city of Pingyao managed to survive the country’s rush to modernization. Aside from the tourists snapping photos with their iPhones and other modern sights, it’s easy to feel as if you’ve stepped back in time to the days of 19th century imperial China while strolling along the streets. The UNESCO status, granted in 1997, certainly helps there. Of course, with that status comes increased tourist numbers, and this small town is straining to meet the demand. 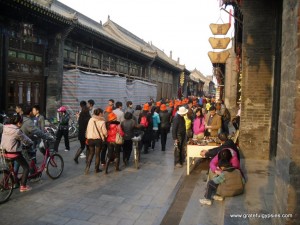 There are a few direct trains from Beijing to Pingyao every day. Your best bet is to take the K609 train, which leaves Beijing station at 11:51 PM and arrives the next morning around 9:30. This train has sleeper bunks, but they’re in hot demand so you’d better do your best to book in advance. Alternatively, you can take one of many daily high-speed trains from Beijing West to the provincial capital of Taiyuan, from where you can easily hop on a bus and be in Pingyao in two hours. 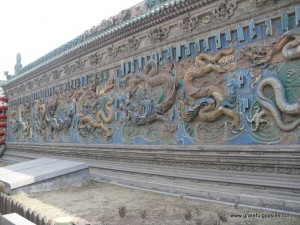 A nine dragon screen, a common sight in China.

In terms of getting around the ancient city, hoofing it is the best way to go. Without any cars on the roads, it’s quite pleasant to stroll around and take in the sights slowly. For a little bit of fun, you can also rent tandem bicycles to cruise the streets. 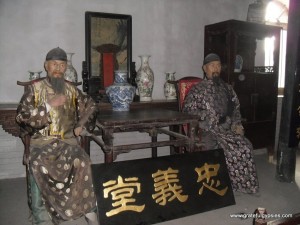 As far as sightseeing goes, there are plenty of temples, old shop houses, and more to keep you busy. There’s just one entrance ticket for the entire walled city, which will set you back 150 RMB. You can also take a stroll along the old city wall for a bird’s eye view of this traditional Chinese city. If you have more time, there are also two notable temples a few miles outside of the town – Shuanglin and Zhenguo. 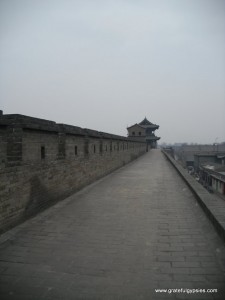 Strolling along the old city wall. 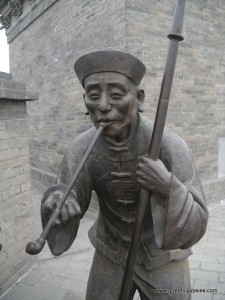 There are plenty of guesthouses and hotels in Pingyao, as it is a wildly popular destination with Chinese tourists. More and more foreign tourists are including it on their China itinerary, but it’s still very much Chinese. When it comes to dining in Pingyao, you’ve got to try the specialty Pingyao beef (平遥牛肉 – píng yáo niú ròu). Shanxi is also famous for noodles, so you might as well try the “cat ear” (猫耳朵 –  māo ěr duo) variety. Don’t worry – no actual cat’s ears are used in the process, it’s just a clever name due to the appearance of the noodles. 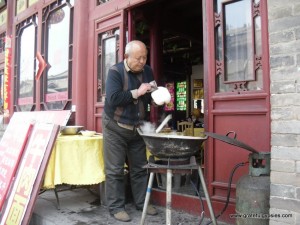 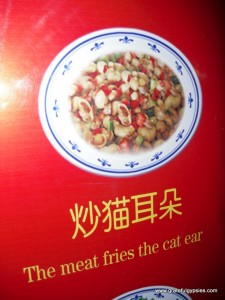 Outside of the tourist attractions, you’ll have plenty of fun just wandering the streets and practicing your Chinese. There are tons of opportunities for silly photos, and you can even play some games in the street. 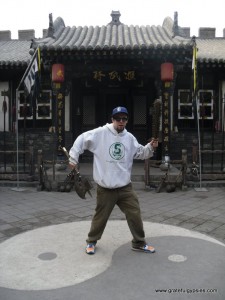 Posing with some old weapons. 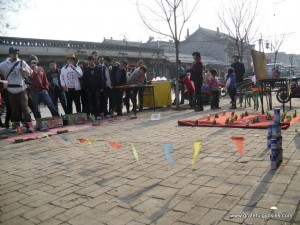 Carny games in the streets of Pingyao.

To give you more of an idea what a weekend in Pingyao is like, here are two videos from my trip there a few years ago: