Modern Kung Fu and Commercialization (现代功夫） Posted by Stephen on Nov 13, 2011 in Culture 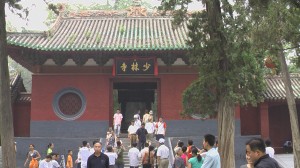 On the surface (在表面上), modern Shaolin Kung fu seems little altered from its ancient and austere roots. Monks still dress the same way, perform the same dazzling feats and train at the same place. The Shaolin temple has been rebuilt in keeping with traditional architecture and the “Shaolin Way” has been exported throughout the globe. It would appear that the legacy of kung fu lives on in perpetuity. Yet like most things in China, appearances can be deceptive. If you scratch the surface of kung fu culture in China one will find deep currents of modernization and change lurking below. 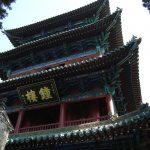 If you’ve followed the previous posts about the history of kung fu and Shaolin, you know that the main purposes for practicing wushu were for a balance of body and mind. Further, most citizens and followers of kung fu were also heavily involved in tantric Buddhist practices or were Daoist and Confucian philosophers. Hence, kung fu began as a form of spirituality–a way of remedying the dichotomy of man to find balance and harmony. Kung fu was taught as a skill to know, but seldom use on another.

While various schools of wushu did participate in violent acts, warfare and conflict, most of these schools only did so as a last resort, choosing violence deterrence over all out battle. Kung fu became a solemnly practiced art form–with little to no pomp and circumstance outside of temple walls.

When modernity finally reared its ugly head (in the turn of the 20th century), people were fed up with esoteric practices and scholarly pursuits of this “elite class”. Instead of looking to propriety they wanted to evolve past the ancient practices that they perceived as weighing them down in a this modern world. In the decades that followed (including the end of the Ming Dynasty, Japanese occupation and Cultural Revolution) kung fu culture was seen as a blight on the history of China, and along with other art, culture and practices, was removed almost entirely from the general populace. Kung fu was facing extinction.

But then, echoing his western counterparts, although doing it most emphatically and succinctly, Deng Xiao Ping made a great declaration that reverberates throughout Chinese culture today: “To be rich is glorious”. With that the Open Door Policy, aka, the opening of China to global markets was born and China began looking for anything that it could export or sell. Surprisingly enough it was kung fu culture that was one of the first things to be marketed, packaged and sold both in China and abroad.

Within years Jet Li movies about Shaolin or ancient China were everywhere. Bruce Lee took this culture and ran with it, bringing kung fu martial arts to the rest of the world. What started as a cult following soon blossomed into a phenomenon in mainland China. By the beginning of the 21st century, kung fu was synonymous with cinema and action movies. Kung was back, baby. 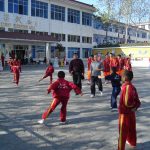 One of Dozens of "Shaolin Kung Fu" schools in the immediate Deng Feng Area.

But with kung fu’s commercial appeal and resurgence in contemporary culture came contradictions to the practice itself. The once anti-materialistic society had transformed into a paycheck for athletically incline youngsters. Soon schools sprung up everywhere, offering to train and mold your child into a famous, silver-screen kung fu artist. Sure the pursuit of kinesthetic perfection remained, but increasingly devoid from Shaolin culture was the mental aspect. After all there is little room for meditation and reflection in this fast paced world.

Nowadays, kung fu schools like Shaolin have become tourist attractions, like Disneyland with clergymen. The entrance to the Shaolin temple is paved with mega-screen tvs, gift shops, photo stands and tea houses. Monks perform their dazzling routines every hour, on the hour, and will sign pictures and pose for photos (for a fee obviously) after their shows.

When you ask an aspiring monk what he wants to do, he’ll most likely say move to Europe or the US and open his own kung fu school–ultimately getting enough acclaim to star in his own infomercial or movie. If you ask about the Buddhist or meditative aspects of kung fu, most will answer quite candidly: that they don’t pay it much mind. These guys are incredible athletes, basically the jocks of China. For these mini-meatheads it’s all about jumping higher, kicking harder and achieving stardom, not seeking enlightenment.

Click for a video on “New Shaolin Order: The Modernization and Commercialization of Kung Fu Culture” – A film by Steve on Vimeo.

Then, on the flip side, there are foreigners, like me, who come to Shaolin and China to learn and understand the culture and history of this legendary place, while also looking to get our asses kicked. For a mere 400 US dollars a month you can get included room, board and 6 hours of Shaolin training a day at a variety of schools in the Deng Feng area, just like any Chinese citizen would. The only difference is the price, which is three to five fold what a young Chinese person’s parent would pay. Foreigners love it though, and are more than willing to pay a half months apartment rent to get this eye-openning experience. As a result this has become a popular trend in Deng Feng, as many kung fu schools are now offering “western living accommodations” for foreigners that want to take a crack at Shaolin wushu. Just Look at all these 老外! 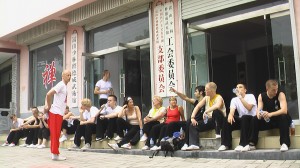