My name is Sasha, and I’m thrilled to introduce myself as the newest member of the Transparent Chinese team.  First, I’d like to thank Jeremy and Steve for giving me this opportunity to share my Chinese experiences with the world.  Every month, I’ll be writing on the blog here, as well as posting original video content on the Transparent YouTube page.  I promise to do my best to bring you content that is as informative and useful as it is entertaining and hilarious.  You can expect a diverse mix of content, as I plan to write/film pieces on Chinese language, culture, and history while also covering two of my favorite subjects – music and travel.  To begin with, I’ll take you on a journey through my transformation from a completely confused 老外 arriving in China with zero Chinese skills, to an only semi-confused 老外 able to survive and communicate somewhat effectively in Chinese… 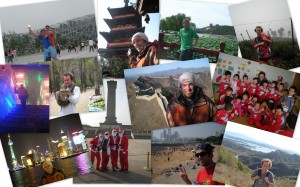 A collection of some of my favorite photos from my first year in China.

Learning a new language can be both incredibly difficult and frustrating at the same time.  For a native English speaker attempting to learn Mandarin Chinese, these difficulties and frustrations can, at times, seem insurmountable.  At least, that’s how I felt back in Summer 2008 after arriving in Beijing equipped with Chinese skills the equivalent of one grain of white rice.  However, after months of relying on friends and my phrasebook, things finally started to make sense.  Rather than being laughed at because of my feeble attempts to speak, locals started to understand me.  Instead of pointing to a random dish on a menu and praying for the best, I was able to confidently order a handful of dishes that I’d come to love.  It was truly a wonderful feeling when I eventually felt confident enough to venture out into the streets alone, without my phrasebook.

I have now been in China for a total of one year (I went home for 9 months in between stints here), and this time I don’t have a plane ticket home.  Having absolutely zero formal Chinese training – at home or in China – I feel that my progress over my short time here is living proof that the best way to learn a language is to dive in head first.  I’ve never crammed for a Chinese test; instead, I’ve studied the menus from my local restaurants.  I’ve never taken part in a listening comprehension class; instead, I’ve done my best to understand the thick Beijing accent apparent in most cab drivers.  I am by no means an expert in Chinese (my abilities are best described as “survival Chinese”), but I can offer insight and advice on how to get started, improve, and practice your Mandarin.  So, if you don’t know your 你好 s from your 再见s, or your 这个s from your 那个s, this is for you.  If you think speaking in tones is what those insane televangelists do, this is for you.  If you think that Mandarin is a delicious little orange, this is for you.  Without further adieu, I present to you my first installment of “Poor Man’s Chinese”:

Upon my arrival to Beijing on the eve of the Olympics Opening Ceremony, I was only capable of saying 你好 (surely with improper tones).  Luckily for me, the people I would be working for picked me up at the airport.  Sufficiently drowsy from the 22-hour trip from Detroit to Chicago to Tokyo and finally to Beijing, reality had not yet set in.  After exchanging greetings with my future room/work mates, we piled into a mini-van and headed off to the city.  About 30 minutes or so into the drive, our boss seemed a bit worried that the driver had taken a wrong turn.  He made his concerns known, which then sparked a fierce debate between the driver and his friend in the front seat (at least that’s what it sounded like).  Shortly thereafter, the driver realized he had missed the exit.  “That’s fine,” I thought.  “He can just get off at the next exit and turn around.”  Wrong.  Instead, the driver pulled over on the shoulder, flipped the van into reverse, and backed up a good mile or so, against the flow of traffic, to the proper exit.  It was then that reality set in.  Life is different in China, to say the very least.  I quickly realized that some adjustments would need to be made.

First of all, there was this whole matter of communication.  From the start, I was very intimidated by the language.  As an English speaker familiar with the rather simple, mere 26-letter alphabet, Chinese characters 汉字 (hàn zì) looked like thousands of intricate pictures.  Surely, I would never be able to make sense of them.  Then there was the matter of speaking.  A few weeks in, and I was only capable of saying a few words:

While I was happy to have mastered a few key words, it was pretty obvious that it would be necessary to add a few more to my arsenal.  Sitting down for a meal by myself, I was only able to tell the waiter, “Hello.  Chicken.  Beer.  Thank you.”  Needless to say, I got a lot of laughs as a result of these interactions.

After about a month of living in Beijing, I started to get frustrated.  Playing charades with people – as in putting up bullhorns if I wanted beef in a restaurant – was getting old.  Constantly calling my friends, who had had the good fortune of studying Chinese before moving to China, was getting old.  Not being able to understand anything was, alas, getting old.  If I was going to live in China for a year, I was going to have to learn how to communicate, and fast.

While the next few months proved to be both difficult and frustrating – while getting drilled on tones and constantly being misunderstood – the rare occasions where I was able to succeed in speaking Chinese provided more than enough motivation to continue to work at it.

My students here in Beijing once told me a joke:

I was officially on a mission to prove them wrong.