A Busy Summer Posted by Serena on Oct 4, 2013 in Uncategorized

This summer I have been very busy making all sorts of conserve (preserves) with produce both from our orto (vegetable garden) and kind donations from my friends, who rather enjoy the end products. Let’s see what’s in mia dispensa (my pantry): I started the production line in May with la marmellata di fragole (strawberry jam), because my brother Gippy, who was here in Italy for a short holiday, had the bright idea of buying two large boxes of strawberries, the equivalent of about 4 kg of fruit. “Erano in offerta!” (They were on offer!) he said. “Sì Gippy, ma le fragole non si mantengono” (Yes Gippy, but strawberries don’t keep) I replied. “Allora portale a casa e facci la marmellata” (Then, take them home and make some jam). 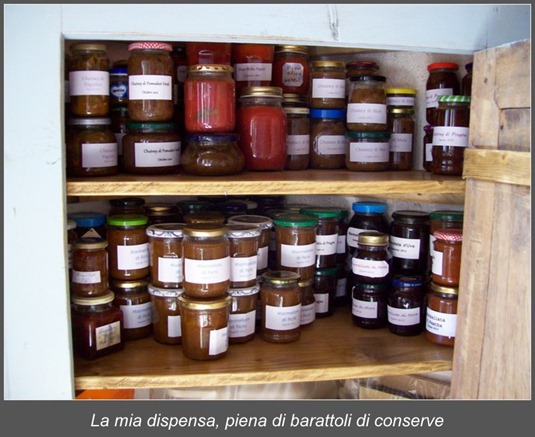 In June it was marmellata di pesche (peach jam) and marmellata di albicocche (apricot jam). Giovanna, la moglie del mio fruttivendolo (my greengrocer’s wife), knows that I like making all sorts of conserve and cakes, so every now and then she fills my shopping bags up with fruits or vegetables which are bruised or too ripe: “Queste non le posso vendere, hai tempo di fare un po’ di marmellata?” (I can’t sell these, do you have time to make some jam?), and I can never resist the offer, even if I have to stay up until late to finish making the jam.

In July I made 16 jars of marmellata di amarene (sour cherry jam), and the first two batches of apple chutney and green bean pickle. I learned to appreciate chutneys while I was living in England, and I’ve got many good recipes from my mother in law Jo. Since I came back to live in Italy I’ve started introducing them to friends and family, who have mostly fallen in love with my chutneys and pickles, but are still struggling with the pronunciation: kootnay! A couple of years ago I gave a jar of chutney di prugne (plum chutney) to Giovanna, la fruttivendola (the greengrocer), to try, explaining that chutneys are eaten with cheese (it’s common to eat honey with cheese here in Italy). A few weeks later I asked Giovanna if she liked my chutney, but she replied that she hadn’t tried it yet because she was saving it for the village feast. Months went by and every time I asked she gave me the same reply, until one day her husband Renzo told me that she had put the unopened jar in her special cabinet together with the wedding presents! 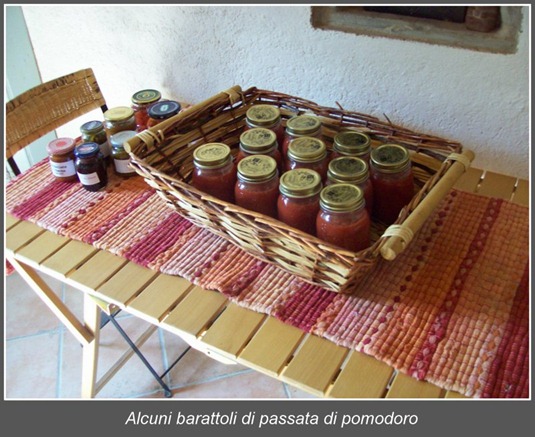 Back to this summer’s preserves, August and September have been extremely busy: lots of tomatoes, therefore lots of passata (sieved cooked tomatoes), and then a few jars of pomodori pelati (peeled plum tomatoes) and sugo di pomodori (tomato sauce ready to dress pasta with). As well as the tomatoes I made  a little marmellata di more (blackberry jam), 16 jars of marmellata di fichi (fig jam), from fruit donated by my friend Olga, some more apple chutney, and plenty more green bean pickle, thanks to my friend Daniela’s bean supply.

What next? tomorrow is going to be marmellata d’uva (grape jam), and when I come back from England it will be green tomato chutney.