Christmas in Japan Posted by eriko1 on Dec 20, 2021 in Culture, Holidays, Traditions

I know I should write something about New Year in Japan. But I wrote about 年賀状, 除夜の鐘 ,福袋andお節  present and past last year. So I am going to focus on Christmas in Japan.

For a non-Christian country, Christmas is a huge event even though it is not a holiday (祭日saijitsu) in Japan. Shopping streets are decorated with illuminations starting at the beginning of November.

The Christmas season starts early in Japan. Christmas markets are open and get so many visitors. On Christmas Eve, many have dinner at a fancy restaurant, or at home with a Christmas cake. And there is something that you must have at home Christmas dinner or parties. Of course, it is Kentucky Fried Chicken! You must reserve (予約する yoyakusuru) your dinner by 12/17 and designate a day and time to pick it up. Not only the fried chickens, KFC offers a whole roasted chicken, a roasted thigh, and roasted breast meat along with the side dishes such as French fries, biscuits, and nuggets. Forget such traditional Christmas side dishes as mashed potatoes, stuffing, sweet potato casserole, and green beans!  It seems it is very competitive to make the reservation online, and many people post their frustration on Twitter that they cannot make reservations, and that the Christmas package sold out (売り切れる urikireru).

When you go down to the basement of department stores, affectionately called デパ地下(depachika), there are so many gourmet stores with ready-made food. And you may have tasty roasted chickens in your local stores as well. Why do you have to have KFC?  I believe it is a triumph (勝利 shouri) of KFC Japan’s marketing.

I wanted to share just a snippet of the most famous J-Pop Christmas songs released in 1980.  According to Takashi Odajima, a columnist, this song transformed Christmas in Japan from a children’s event to the most important and romantic event for lovers (恋人 koibito).

Unlike the US and many countries that celebrate Christmas, Christmas Eve is considered more important than Christmas Day itself. It is more “romantic.” Not much going on Christmas Day as it is just a regular working day. After 12/24, many Christmas items are sold at a deep discount (割引 waribiki).  There was really a bad joke going on back in the 90s in Japan, referring to a 25-year old woman as “Christmas cake.” Fortunately, many young people have no idea what this joke means as even the Japanese society has progressed (進歩する shinposuru) and women are not in any hurry to get married or even not get married at all. 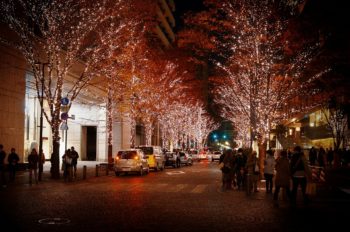 After Christmas Eve, the whole country shifts a focus on New Year. The Japanese government instituted the New Year holidays to be 12/29 to 1/3 in 1988.  So, for many companies, the last day of business is on 12/28 . It is called Shigoto Osame (仕事納め) or Goyo Osame (御用納め). And the first day of business in the new year is called Shigoto Hajime (仕事始め) or Goyo Hajime (御用始め), and it is 1/4 in 2022.  Although there is not a definition, the middle of December to the last day of December is called 年末 (nenmatsu) and January 1 to 3rd is called 年始 (nenshi). The term used so often, 年末年始 (nenmatsu nenshi) loosely refers to this period.

Some people take a day or two vacation days to make this a longer break to go Hawaii, the number one destination for the New Year holiday. Before people started going abroad for the 年末年始break, they used to go back to their home town (故郷 kokyo). And those of us who called Tokyo as the home town could enjoy the less-crowded city. Due to COVID-19, however, international travel is still very restricted. JTB, one of the major travel agencies in Japan, forecasts (予測する yosokusuru) that the number of domestic travelers for 年末年始in 2021-2022 will increase 180% to 18 million from the comparative period of 2020-2021. In 年末年始in 2019-2020 (prior to the COVID-19,) it was 29 million. In October, the State of Emergency was lifted, and it was hoped that the number of domestic travelers would increase drastically during 年末年始. However, the Omicron strain seems to have dampened that hope. Approximately 75% of companies have reported that they would not hold 忘年会 (bonenkai, literally forget the year party). I am sure that many employees are happy about that as 忘年会 are regarded as an obligation. At the same time, 75% of parents also responded that they would spend Christmas at home with a cake and chicken.

Whatever holidays you celebrate, happy holidays to you. My 2021 was unexpectedly a bad year as I lost my canine hiking and life partner suddenly and unexpectedly.  May 2022 bring you a lot of happiness.  Enjoy every trail.