The Linguistic Origins of ಠ_ಠ and Other Unusual Internet Faces Posted by Malachi Rempen on Mar 21, 2016 in Archived Posts

Like me, you may have just recently starting bowing to internet pressure to put smileys in your e-correspondence – more and more, I get the feeling that without them, messages come off as overly serious. I hate myself for doing it 🙂 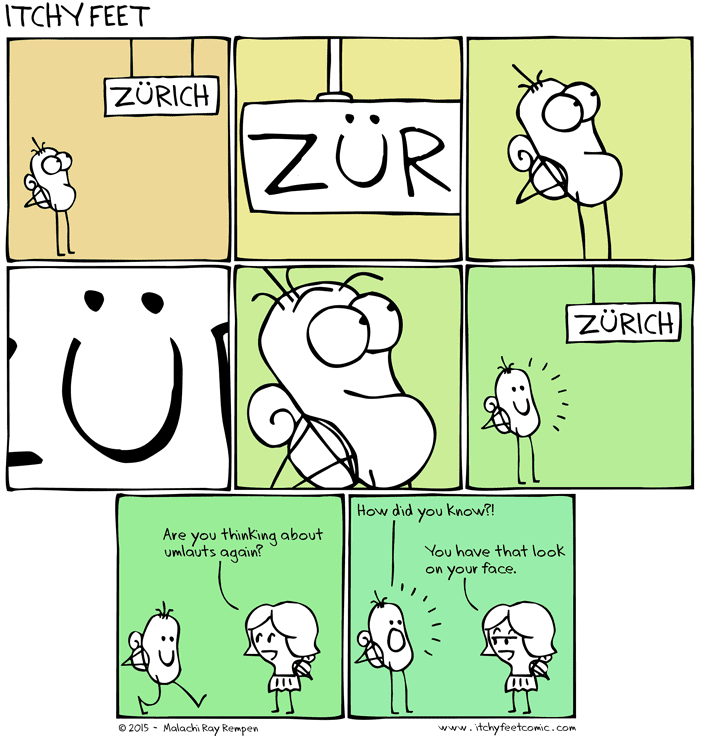 But in case you hadn’t noticed, the internet has long moved beyond colon-closedparenthesis to represent emotions in this textual medium. Thanks in large part to the influx of Japanese creativity in re-appropriating the entire range of visible symbols from across all written languages – which they call kawaii or kaomoji – no longer must we turn our heads sideways to grasp the emotional context of a particular statement. They started simple, with (*_*), for example. They’ve now graduated to such illustrious works of textual art as ლ,ᔑ•ﺪ͟͠•ᔐ.ლ and ᕙ༼=ݓ益ݓ=༽ᕗ, which I guess the internet calls “dongers.”

But while you no doubt recognize faces and, yes, even emotions in these little typed creatures, you may not realize that they are cleverly borrowing letters and symbols from every known language to build these particular emotions. The human brain has an amazing ability to see faces everywhere (see: the comic above), and the internet has taken that principle and run with it. So let’s break down some kawaii you may have seen around the web, and marvel at their ingenious construction.

This angry fellow is a simple graduation from the more common *_* or ^_^, but it’s the beginning of using letters from other languages, rather than just simple symbols. The accented ò and ó letters are found in Spanish, French, Welsh, Vietnamese and many other languages. You probably already knew that.

ಠ_ಠ
Known as the “look of disapproval”, this infamous face introduced many to the idea of using not just letters, but letters from languages we didn’t even know our computers could read. The ಠ is a letter in the Kannada language, from India. You probably didn’t know that.

( ͡° ͜ʖ ͡°)
This creepy guy is known inexplicably as the “Lenny face”, probably in reference to some creepy guy named Lenny. I can’t really describe in words the emotion he appears to be conveying, but my brain immediately recognizes it. I suppose that’s why these emoticons exist in the first place. These symbols aren’t actually from other languages, but a clever combination of various diacritical marks usually used as pronunciation guides. There’s no reason anyone would ever need to pronounce the degree symbol correctly, and that’s why we now have this delightful ͡° eyeball.

¯\_(ツ)_/¯
Here we’ve got the “shrug face”, whose chief feature is the Japanese katakana character ツ, which so obviously resembles a smiley face I’m amazed the Japanese didn’t use it two hundred years ago. Of course, for us westerners it’s not smiling quite enough, which I guess means it’s shrugging. Sure, why not.

(ง’̀-‘́)ง
“Put up your dukes!” Ha ha, so adorable. This combative little critter is a combination of the Thai character ง and what appears to be an accented accent,’̀. His less frightening cousin (ง°ل͜°)ง even makes use of an Arabic letter for the nose.

(づ｡◕‿‿◕｡)づ
Now, I don’t know what that is. A whale giving thumbs-up? A fat, flat fish offering tiny crackers? It’s another combo of Japanese letters, punctuation and diacritical symbols. Some kawaii in a similar vein like ｡゜(｀Д´)゜｡ use the Cyrillic letter Д, I suppose to represent a screaming mouth.

I gotta say, what I love most about these little guys is that this whole kawaii phenomenon is purely one of the internet age. At no other time in history did writers think to combine Cyrillic, Arabic and Japanese lettering with punctuational symbols to convey their feelings. Now that we’re being inundated with actual visual emoji like

, these cleverly-constructed kawaii may soon go the way of the dodo. So enjoy them while they last.