It’s not easy being a beginner. You need a lot more to do a lot less – that’s as true in language learning as anywhere else. But like a seasoned traveler that packs less and less, you too will eventually need only your smarts. 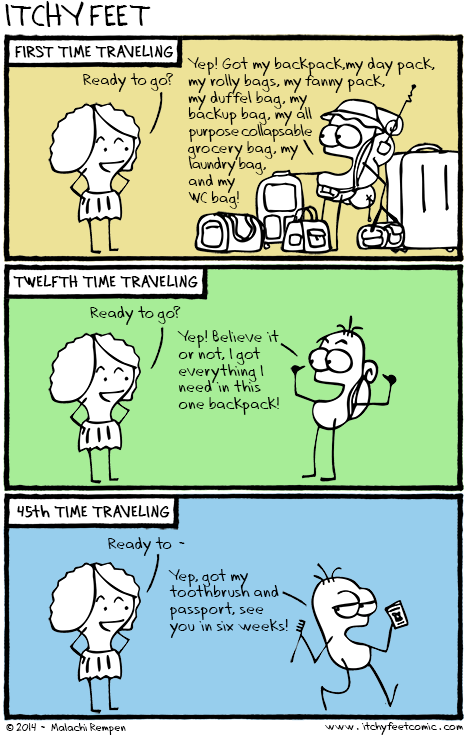 There’s a parable about beginners I’ve heard, and it involves cats, so since you are the internet, I know you’ll like it. When kittens are young, just old enough to walk, they have to take dozens of steps to keep their balance. Their paws go every which way just to go a small distance, and they often fall over anyway. But when kittens grow into adult cats, they get much better at it. They need to make far fewer movements to get where they want to go. They get properly slinky – they can walk along the top of a fence or sneak through the bushes like ninjas. They learn to do more with less. Practice makes perfect, as they say – it just takes falling down a bunch for them to go from tipsy kittens to agile cats.

That’s how it is with traveling. Rarely do you embark on your first trip abroad with nothing but a passport and your toothbrush. You’ve no idea what you’ll need, so you pack for all eventualities. What if there’s unseasonable snow? Or a heat wave? Better pack for both. What if there’s no toilet paper? Better bring a package or two. What if you’re invited to a wedding? Better pack for that, too. You never know. I remember when I was first embarking on my trips as a teen – my bag was humungous, weighed down by everything from seventeen pairs of socks to an extra shower drain plug. You know, just in case.

Then, the more you travel, the more you realize you don’t need much. Too hot? Wear less. Too cold? Buy or borrow a sweater. You can live without cutting your nails for two weeks, just cut them the night before leaving and forget about it! These days they have travel clothing that looks as good as nice casual wear. Wear one outfit for all occasions, nobody’s going to care. You’re traveling! Eventually you’ll pack like I do now – one small fits-below-the-seat-in-front-of-you backpack, and that’s pretty much it, no matter where I’m going.

And that, of course, is how it is with language learning. At the beginning you’ll stumble around like a kitten, unsure of where to place your steps. You’ll halt and repeat and fall short of what you need to communicate. And even when you have more words, you’ll need to use all of them to talk around the one word you don’t know. You’ll pack your dictionary and phrasebook and flash cards and app-jammed phone everywhere you go. You’ll need to read that sentence five or six or ten times before you understand what on earth they’re talking about. But as you go, you’ll get better. You’ll need less to get along. You’ll know the few words needed to communicate succinctly. You won’t need that phrasebook because you’ll pick up the phrases as you go. Your mind will get better at keeping vocab, so you won’t need those flash cards. You’ll get better at learning. You’ll be able to skim through paragraphs like an expert, not needing to know every word in order to glean the gist of what’s written, even the subtle voice the author is using. It’ll becoming second nature.

All you need is to keep going. Eventually, you’ll become that slinky cat of language learning.