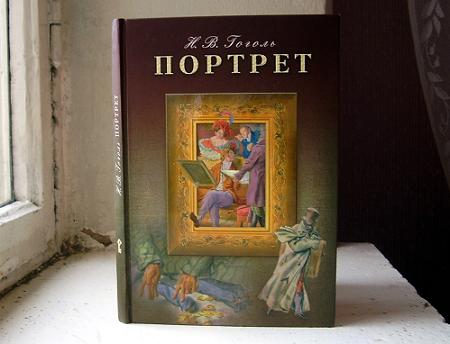 When opening this brand new 21st century edition of this 19th century «повесть» [story; tale; ‘novella’] «Портрет» [“The Portrait”] you find the following information on the first page: «издаётся к 200-летию со дня рождения Николая Васильевича Гоголя» [is published for the 200th year anniversary of Nikolai Vasil’evich Gogol’s birth]. What else is special about this edition? Well, it is part of the series «русская классика в иллюстрациях» [Russian classics in illustrations] and that’s why… 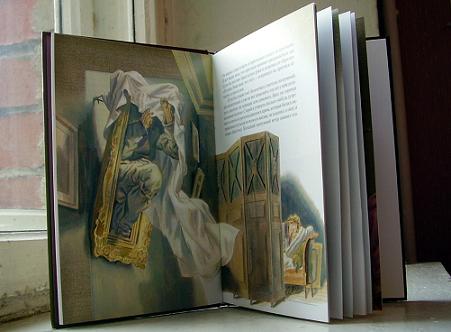 …it is filled with beautiful illustrations like the one above just as if it had been «детская книга» [a children’s book]! The illustrations were made by a certain artist by the name of «С. Г. Гонков» and made me feel like I was 10 years old again as I read through this book, coming across inspired pictures here and there. Now, this story by Gogol’ is not a children’s story – that’s why I was so surprised when I was given this book as a gift a month ago. Illustrated novels for adults – now that’s a great idea! This edition has not only paintings to look at, but a serious introduction written by a candidate of philology and almost 20 pages of commentaries. I don’t know about you, but I love to read commentaries to books, because you can learn a lot from them. In this book I learned that the word «беленкая» [‘white’ (adj. fem. sing.)] during the 19th century meant «бумажная ассигнация достоинством 25 рублей (белого света)» [paper bill worth 25 rubles (of white color)].

While I wrote my last post – «Ода гречке» [An Ode to Buckwheat] – I thought I was ‘coming out of the buckwheat-closet’ and felt more than a little nervous to read your reactions afterwards. And then it turned out that I wasn’t the only one with a thing for «царица круп» [the Queen of Grains] out there! So many comments from all of the world! That’s great! Thank you all! It was wonderful to hear about your love for Russian cuisine. I will be sure to write more on the subject – «имейте терпение» [have patience]! However, now I find myself facing another obstacle – how to follow such a grand post on «гречка»? With a profound study of different «маринованные огурцы» [pickled cucumbers], perhaps? Or by sharing some in-depth reports from exciting mushroom hunting trips (the season is just about to start here in Russia, you know)? No. I’ve decided to let the food related topics rest until I’ve acquired a good Russian cookbook and in the meantime I allow for «Николай Васильевич Гоголь» [Nikolai Vasil’evich Gogol’] to take over the blog today. After all, the year 2009 is his year – 200 years since the birth of everybody’s favorite Ukrainian-Russian 19th author – and I’m ashamed to admit that I have not been attentive at all to this fact during the entire first half of it. Today I went to Yekaterinburg’s literary museum, which is located in a very picturesque part of the city called «литературный квартал» [The Literary Block] (the whole block almost entirely remains the same as it was in the 19th century – definitely worth a visit if you’re passing by the Urals), to have tea with my friends who work there. And it turns out that they had an extensive exhibition dedicated to Gogol’, which I had completely missed, but as I looked at it I came to realize that people should read more Gogol’. I’ve been contemplating putting together a ‘Summer Russian Reading Guide’ for about a week now, and after reading Lizok’s entry on her blog “Reading Russian Books at the Beach” I conclude that I’m not the only with this idea. However, let’s get started with a few examples on how you could honor the genius Gogol’ by reading one of his works the summer of ’09!

«Портрет» (1835) [“The Portrait”] is the book pictured above in the illustrated edition that I just finished reading an hour ago and very much enjoyed. The way the book was written was quite surprising to me, since I’m mostly familiar with Nikolai’s more humoristic works – though by way of his long sentences and frequent use of «причастие активного залога прошедшего времени» [the active participle in past tense] in sentences like: «На другой же день, взявши десяток червонцев, отправился он к одному издателью…» [On the next day, after taking about ten three-ruble gold coins, he went to one publisher…]. The novella’s plot circles around a painting with demonic powers, able to make any honest artist into a jealous and evil individual incapable of enjoying life. The main subject of it is the question ‘what is talent?’ and ‘what is an artist?’, two questions which we know to have been very dear and important to Nikolai Vasil’evich. The novella is divided into two parts; in the first we find out how the painting led one aspiring poor artist to ruin, while in the second we meet the painting’s author and learn about his choice to join a convent after finding out what his own creation is capable of. As always, Nikolai Vasil’evich is most convincing when touching upon religious ideas in his works – for those of the readers able of keeping an open mind, that is.

Other works of Nikolai Vasil’evich worth checking out:

«Мёртвые души» (1842) [“Dead Souls”] was meant to be the first part of a trilogy based on the concept of Dante’s “The Divine Comedy” and supposed to chronicle the fall and rise of «Чичиков» [Chichikov]. Nikolai Vasil’evich only managed to publish the first volume, in which Chichikov travel the Russian countryside buying ‘dead souls’ – «крепостные» [serfs] that have died since the last counting of them but have not yet been marked as dead in official documents – as a way to make his fortune. While he visits several rich and not-so-rich «помещики» [landowners] out in the Russian countryside the reader starts to become aware of the fact that the title of this book has nothing to do with dead serfs, but everything to do with people who are dead even though they continue to seemingly be alive… Nikolai Vasil’evich finished the second volume but burned it and so we’ll never know how things would’ve turned out for Chichikov. What we do know, however, is that the first volume is a masterpiece!

«Шинель» (1842) [“The Overcoat”] is a short story about the poor clerk «Акакий Акакиевич Башмачкни» [Akaky Akakievich Bashmachkin] who does nothing but dream of a new overcoat. I’m not going to spoil the ending for those of you who have yet to read this splendid little story, but I will tell you that I’ve read it many, many times and always find something new to wonder at in Niklai Vasil’evich complex language! (No, I would not recommend reading Gogol’ to beginners of Russian… but reading him in your own native language first, and then in Russian – aided by a good ol’ dictionary at your side – now that I would highly recommend!)

«Нос» (1832-1833) [“The Nose”] is my favorite work of fiction by Gogol’! The first time I read it I could not believe that someone so long ago had managed to write something so brilliant, so funny and so absurd! The first time I read it was when I was 17, and then in Swedish, and I remember that was amazed by the fanastic story – since then I’ve read it many times in Russian and I’m still amazed every time. The plot is extremely straightforward: a man wakes up in Saint Petersburg one morning to find that his nose is missing. He later spots his nose on Nevsky Prospect and by then his nose has become a high official and does not recognize him. Now if you’re not afraid of laughing out loud in public while reading, then I would suggest you bring «Нос» to the beach with you!

Oh, and there’s always the hilarious «Ревизор» [“The Inspector General”] which is a play, but could be read like a novel, too… The works mentioned and recommended by me above are but a fraction of everything great and splendid and funny written by Nikolai Vasil’evich. Maybe your personal favorite did not make my list, but what I really wanted to say was this: you can’t go wrong with Gogol’ the summer of 2009!