Soldagen-´Sun-day´in Norway marks the end of Mørketid Posted by kari on Jan 25, 2011 in Culture, Traditions 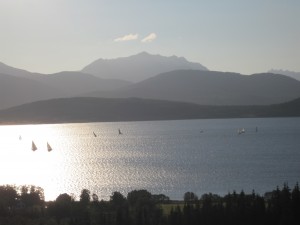 It is now søndag, the 23rd of januar.  Just 3 days ago, northern Norway celebrated Soldagen, the end of mørketid, or the dark time in the north.  It´s sounds strange when you first hear it, doesn´t it?  When you think about not seeing the sun for 2 months out of the year, you quickly understand the need to celebrate it´s return.  Although the sun is technically above the horizon before Jan. 21, because of the mountains, you can´t see it until later.

In northern Norway, and anywhere north of the arctic circle, the last glimpse of the sun is on Nov. 21 and it doesn´t return again until Jan. 21.  While there are a couple of ours of twilight for some of those 60 days, the sun never appears.  People that I have talked to that have lived in the north all of their lives, or if they grew up there and moved south, say that they are just used to it.  It´s no big deal, it just happens every year and then the sun comes back.  I clearly did not get the full range of opinions on the issue though, because I understand that suicide rates go up during the winter and people become depressed more easily.

Here in MN in the dead of winter, it gets dark at 4 or 4:30pm and doesn´t get light again until about 8am.  I find this hard to live with even though I´ve lived here my whole life.  When the workday ends at 5 and it´s dark, I feel like it´s 8pm.  Sometimes it´s hard to get out of bed in the morning when it´s completely dark outside and you know that it´s likely subzero temperatures.  Just a note, it was -29 degrees here the other morning!!

I must say, part of me is relieved that I came home from Tromsø before mørketid set in.  I left on Oct. 6 and I had noticed the days were getting significantly shorter at a very fast pace.  I could feel it coming.  Maybe someday I´ll have the occasion to experience it.  Even those who admit that it can be very depressing, say that it is a time when friends come together and spend quality time sitting around eating and drinking and chatting away.

Whether one struggles through mørketid or not, Soldagen is always a happy day.  Northerners typically celebrate Soldagen with kakao (hot chocolate) and solboller (a berliner-doughnut).  I would love to see the looks on people´s faces when they finally see the sun again after such a long hibernation.