Dealing with Arabic Numbers الأرْقام العَرَبيّة Part One Posted by yasmine on May 5, 2021 in Arabic Language, Numbers

Have you come across Arabic numbers الأرْقام العَرَبيّة and wondered why they are written in the masculine or feminine form or why some numbers don’t fall into a certain pattern? Yes, there are rules قَواعِد to follow and I myself have sometimes gotten these number rules confused. Of course, in many cases, even if the way you used the number in a sentence is not grammatically correct, it will still be understood. But, if you wish to use the الأرْقام العَرَبيّة correctly, it is worth the effort to understand and remember these rules. For part one, we’ll be focusing on numbers 1 to 10. 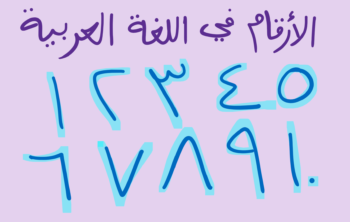 You may have heard that the shape of numbers in many languages those being (123…) are derived from Arabic numerals, while the current Arabic figures those being (١٢٣…), are a modified version of what were actually Indian numbers imported into Arabic through trade relations العلاقات التجارية. If you visit an Arab country, you will find that prices الأسعار in stores, advertisements الإعلانات, currency العُمْلة, etc., will sometimes use the 123 figures and sometimes the ١٢٣ figures, or both. Therefore, it is important to recognize the current Arabic figures.

Let’s first review the numbers from one to ten as figures and in written form.

Try writing down your phone number in Arabic and saying the numbers aloud for practice. 🙂

Numbers, like the rest of Arabic, have gender. Remember how we add تاء مربوطة  “ta’ marbuta” (ة) to make words feminine? So, for example, واحِدٌ becomes واحِدٌة. Most of the numbers as you can see above, by default are feminine when counting, yet also have a masculine form. For example, ثَلاثَةٌ becomes ثَلاث.

The number 2 is slightly different in that إثْنانِ becomes اِثْنَتَان. We don’t often use إثْنانِ/اِثْنَتَان when attaching it to nouns. Can you guess why? How would you say “two men” in Arabic? “Man” in Arabic is رَجُل.

We use the DUAL 🙂 So we would just say رَجُلان. We could still say رَجُلَان اِثْنَان of course.

🎇As our first rule, numbers 1 and 2 AGREE with the gender of the noun that comes BEFORE it. For example:

🎇Our second rule is for numbers 3 to 10 which DISAGREE with the gender of the noun that comes AFTER it which must be in the PLURAL form. For example:

Let’s look at these example sentences:

I just bought one spoon from the market.

I have one notebook.

There are five boxes in my room.

We sat at the restaurant for four hours.

I read nine books during the summer.

✨Here is a video talking about the Arabic origins of the numbers we use and how Al-Khwarizmi’s الخوارزمي‎ discovery of Algebra “al-jaber”الجَبْر made mathematics الرِياضِيّات what it is today. This is a 6 minute documentary in English with Arabic translation on the bottom. Try to pause and read the Arabic to compare with the English.

I hope this was helpful in reviewing your numbers from 1 to 10 and learning how they are grammatically used. Stay tuned for part two where we will cover numbers 11 and above.

Till next week, happy Arabic learning! 🤓