In this post, we’ll be reviewing some grammar. 😁 Before we talk about the passive form in Arabic, let’s remind ourselves what a passive sentence is in English:

In English, we use the verb “to be” + passive participle to form the passive (it was confirmed, they are sold, she has been taught, etc.). Arabic forms the passive by changing the diacritics/short vowels الحَركات on the tenses.

✨To make a past tense verb into the passive: Add ضمة damma followed by كسرة kesra.

شُرِبَ “was drunk” passive past tense

✨To make a present tense verb into the passive: Add ضمة  followed by a فتحة fetHa. 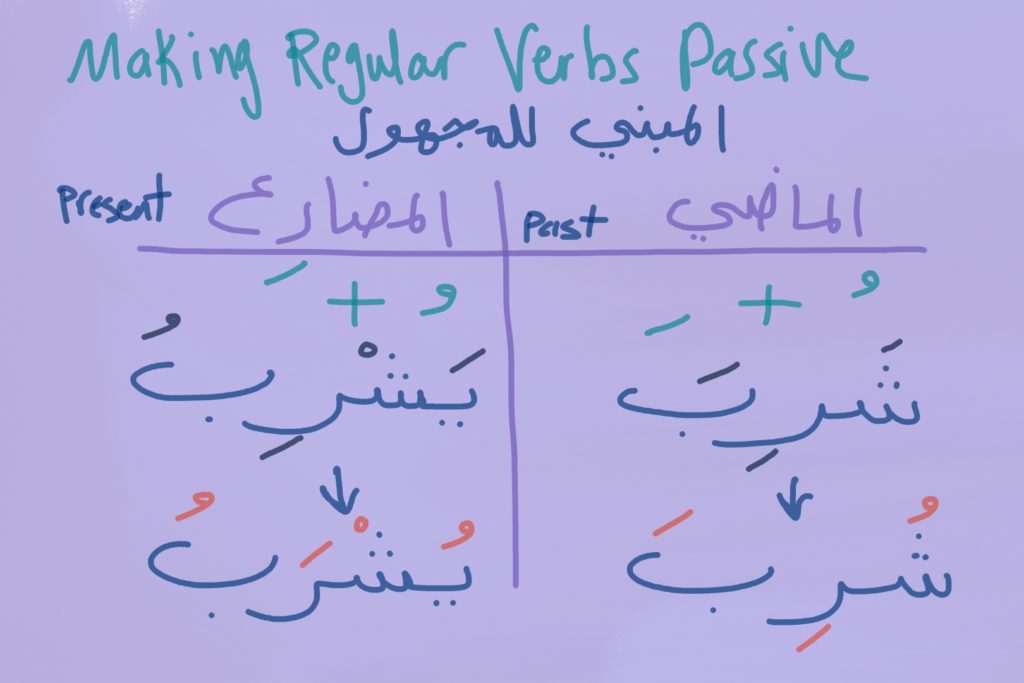 Here are some example sentences:

The letter qaaf is not pronounced in colloquial Egyptian Arabic.

The article was studied.

My money has been stolen from me!

This news was mentioned on the television.

Tea is drunk during family visits.

I was asked to give a title for this book.

Basically, the passive is not as common in Arabic as in English, but you will see it from time to time. The most significant indicator of the passive is the  ضمة at the beginning of both the past and present verbs.

Here are some more examples:

Rain is expected to fall in two days.

The army was ordered to attack.

It is said that this house is deserted.

Note that if you were to come across the passive voice in Arabic in a text that did not provide حركات the diacritics or short vowels, you may mistake a passive verb for an active verb where it may not make sense.  For example let’s take a sentence from above and and take out the حركات.

If  سَرَقْتُ is “I stole”, it wouldn’t make sense because it would make the sentence ” I stole money from me.” It could be “she stole” سَرِقَت which makes sense but it may contradict the rest of the text. Therefore, when reading an Arabic text, keep track of your subjects and that will help you interpret the passive voice correctly.

I hope this post helped clarify the passive voice in Arabic. Till next week, happy Arabic learning. 😊