Over the last few days, the colour orange اللون البرتقالي  could be seen on many Twitter accounts in the Arab world. The reason was to raise awareness about  لنشر الوعي حول domestic abuse against women العنف المنزلي ضد النساء. Many hashtags were created in Arabic as a response to the UN campaign :حملة الأمم المتحدة “Unite to end violence against women” اِتّحدوا لإنهاء العنف ضد المرأة that is celebrated on the 25th Of each month. “Orange the world” or “لوّن العالم برتقاليًا”  is the slogan for this campaign هو شعار هذه الحملة . 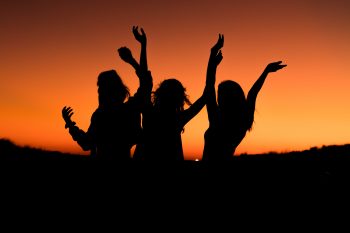 Image Levi Guzman by on Unsplash.com

The first part of this post gives some background about the campaign, in addition to a short report of how Twitter users in the Arab world took part in this digital campaign, using a number of hashtags. The second part (next week) will look into more details about the images and posts that were shared about the topic of violence against women.

*Before we look at how people responded to this campaign, let’s find out more about the campaign’s slogan first.

How did it all start? كيف بدأ الأمر؟

The large number of responses to this campaign was particularly triggered by a post from an Arab girl who spoke up about the domestic abuse she has experienced at the hand of male family members  على يد أفراد (ذكور) من العائلة (see a screenshot of the post below). 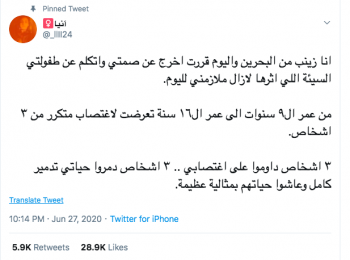 “I’m Zainab from Bahrain and today I decided to break my silence قرّرت أن أخرج عن صمتي and talk about my miserable childhood, which still affects me until today.

From the age of 9 till 16, I was subjected to constant rape اغتصاب متكرّر by 3 people”

Here I list some the three main hashtags (the Arabic ones as well as their English equivalents) around the campaign.

The first hashtag is >

The other hashtag is >> 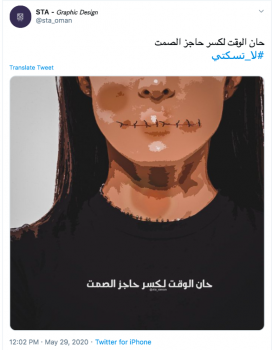 *Translation of the writing on the photo >

The final hashtag is >>

This Arabic hashtag translates exactly as: “We believe the survivors” (appears on the photo below). 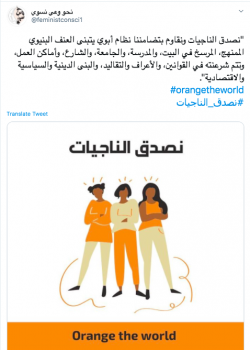 *Below is another photo (left one) that expresses the same idea. 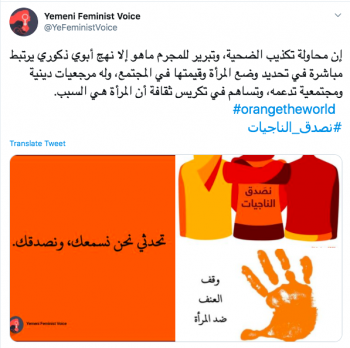 “Speak up, we hear you and believe you.

See you next week for the second part of this post 🙂