(1) The Past Tense الزمن الماضي

1 – A Threefold Verb الفعل الثلاثى  : that which has three letters as its root; كتبَ = He wrote

2 – A Fourfold Verb الفعل الرباعى : that which has four letters as its root; أطلقَ = He launched.

3 – A Fivefold Verb الفعل الخماسى : that which has five letters as its root; تعلَّمَ = He learnt.

(Note 1 : We will get back to these roots later when studying derivatives and conjugations) 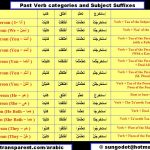 Next time, we will continue looking at Present Tense.

For videos and pronunciation, check our Arabic Transparent Youtube Channel at