The Present Tense Letters (Prefixes) are :

* The Hamza (أ ) referring to the first person singular (أنا ).

* The Noon (نـ ) referring to the first person plural (نحن ).

* The Taa ( تـ ) referring to the person addressed (you أنت ) in all genders and numbers.

Since a verb must agree with its subject in both number and gender, so the shape of present tense verbs looks as follows:

(Note1 : Arabic is a highly inflectional language. The above present verbs in the table by themselves have their own visible subject as a pronoun suffix attached to the end of the verb; e.g. تَكْتُبَا = You both write / يَكتُبوا = They (M.) write. Or the subject pronoun is invisible and understood from context; e.g. أَكْتُبُ = I write / أَتَعَلّمُ = I learn / نَكْتُبُ = We write / نَتَعَلَّمُ  = We learn. Also, The gender of the person is understood from the present tense letters or prefixes attached to the beginning of the verb like the Hamza referring to (I = أنا ).

(Note 2: Future tense is derived from the present tense simply by adding the prefix (سـَ ) or the particle (سوف ) before the verb in the present form; e.g. سأكتُبْ / سوفَ أكتُبْ = I will write.)

(Note 3: Healthy and unhealthy verb tenses will be discussed later.) 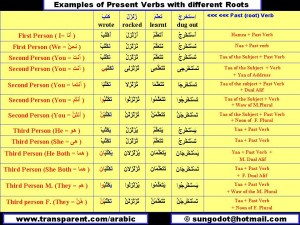 Next time, we will continue looking at Imperatives