(Note1 : To get the Imperative from the Threefold present verb that has a Damma on its second letter, we add a Mazeed Hamza (Alif) with a Damma at the beginning of the verb; e.g. يخرج >>> اُخرج and يكتُبْ >>> اُكتُبْ …. etc.)

(Note 2 : A Mazeed Hamza (Alif) with a Kasra is added at the beginning of other Threefold verbs or other verbs starting with this Mazeed Alif; e.g. يشرب (to drink) >>> اِشرَبْ and يجلس >>> اِجلِسْ and يَنطلِق (to set off) >>> اِنْطَلِق and يستخرج >>> اِستخرِجْ ) 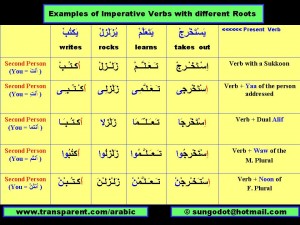 Next time, we will continue looking at Verb Health.

For videos and pronunciation, check our Arabic Transparent Youtube Channel at