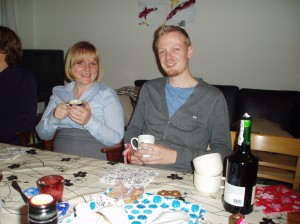 No blog on Danish is complete without a post about hygge. This phenomenon – pronounced with the clear, fronted ”u” sound of French nom de plume or German Zürich – may just be the epitome of danskhed (Danishness). Danes repeatedly refer to it, to the slight bafflement of foreigners: What on earth are they talking about?

Basically, hygge means having a good time, in a tranquil, Danish way. My two-way dictionary translates the word as ”comfort, cosiness”. But what exactly is that?

The notion of hygge – which takes the shape of a noun (hygge), an adjective (hyggelig) and a reflexive verb (at hygge sig) – oozes sofas and snacks, candlelights and silly sitcoms. Or maybe a captivating book on the beach. When you hygger dig, you’re having a good time, you’re relaxing and feeling safe in the jovial (but not boisterous or wild) company of others (or alone). You know they won’t hurt you, and that you don’t have to be perfect in order to gain their acceptance. There’s a lot of snugness in hygge – but not so much rock ’n’ roll. Married couples, ægtepar, hygger sig in their living-rooms, eventually in front of the tv set. Teenagers hænger ud (hang out) downtown. Nonetheless, even when a teenage son is getting dressed for a party that the mother knows is bound to be wild and crazy rather than hyggelig as such, she’ll wish him well with a Hyg dig! (Enjoy yourself!) in the doorway. An old man with smiling eyes and pleasant stories to tell can be perceived as hyggelig, as can a business meeting where the participants all of a sudden find themselves laughing and making settlements without too much fuss. A small woodland house with white smoke rising from the chimney can be very hyggelig indeed, whereas a huge, flashy city hotel most likely won’t fit the category. (Of course, hygge can always be created inside one of the hotel rooms, that’s the handy thing about it!) However, rather few people would describe a passionate football match as hyggelig, and if all your date says about your recent evening out is det var hyggeligt (it was nice), you should perhaps reconsider the affair.

Why are there so few Danish astronauts? Well, for one thing, there are only 5 million Danes. Another thing is that most of us are constantly craving for hygge. The Danish dream is a far cry from the American one. For better or worse, many Danes are shaped by this vision of safety, of being content with your lot and enjoying the pleasures of a quiet everyday family life.