Those Pretty Letters 3 Posted by Bjørn A. Bojesen on Dec 31, 2011 in Uncategorized

Å is the all-Scandinavian letter. It is found in the alphabets of Swedish, Norwegian and Danish, where it sounds more or less like the O of languages like Italian or Spanish. If that confuses you, just imagine that Å’s are A’s that have been O’ed!

Historically, the Å’s were long A’s. In Icelandic, these long rascals are still written Á (but pronounced AUW!) Compare the Icelandich word bátur (boat) with the Danish båd (boat). For centuries Danes quite logically wrote the loong A sound – even after it had been ”O’ed” – as ’aa’.

Then came the Second World War, and suddenly many Danes started noticing that the Enemy used ’aa’ in their language too. Some pensive fellows were looking for a way to make Danish look less German.

Fortunately, the Swedes had invented the symbol Å for the old long A sound. At a conference in 1948, it was decided that ’aa’ henceforth be written ’å’ in Danish. The new letter was called bolle-å (bun å). It was also decided that common nouns should no longer start with a capital letter, a trait which Danish had hitherto shared with German as well.

Then came the Internet along, with no place for Å in web addresses (until recently). All of a sudden, conservative spellings in place names like Aalborg (instead of Ålborg) seemed trendy and up to date. 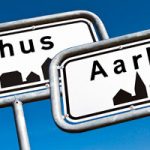 What’s the second largest city of Denmark? If you mail the tourist office, they’ll say Aarhus. However, if you ask me, I’d say Århus. How come?

Several decades ago, Aarhus modernized its spelling and became Århus. In 2010, however, the city’s politicians, including former mayor Nicolai Wammen, decided to revert to Aarhus. The argument was that this would help promote the city on the internet and abroad. However, Dansk Sprognævn – the Danish Language Council, which regulates the Danish spelling and publishes the spellig dictionary Retskrivningsordbogen – has stated that Århus is still correct Danish, but that there is nothing preventing the city council from promoting their own spelling. So here we go – in 2011 Jutland’s largest city is spelt in two ways: Århus and Aarhus. Pick your choice.

I tend to stick with Århus. Foreigners who can’t write accents on their keyboards, just drop ’em anyway, googling ”cafes in Arhus” rather than ”cafés in Århus”. And the Å spelling provides the city name with an exotic, Scandinavian flavour which ought to tickle any tourist’s imagination… (On the other hand, I know people who are perfectly happy with the Aa spelling!)

Stay tuned for more interesting stuff about Danish language and culture in 2012!