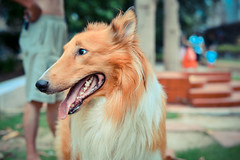 Don’t cough while talking about females! (Hun = she, hund = dog…)


A non-Dane once left a Danish language course in Copenhagen just a wee bit frustreret (frustrated): How was he ever going to learn a language where you didn’t know whether you were crying mor! (mother!) or mord! (murder!)?

However, there is a difference between the two words (and it’s not the d, which in this case is silent)! The first one is pronounced, more or less, like the last syllable of ”amour”. The second word sounds identical, except that Danes, while saying it, make a little hiccup sound down their throat. That’s the stød – the famous devil in Danish pronunciation…

Et stød means ”a thrust”. You’ve got the same sound in English, between the ”uh” and the ”oh” of uh-oh! (Say the word slowly, and notice how your vocal chords clash.) If you speak Cockney, the sound is very frequent, like in butter, ”bu’er”.

Sometimes even two syllable words have stød. That’s because these words originally had only one syllable. Manden (the man) comes from mand+en. Therefore, it is still pronounced with a stød on the first syllable. Many verbs also have stød on their first syllable in the present tense: jeg løber (I run), vi læser (we’re reading), kommer du? (do you come?) (Once upon a time, these words must have been more like ”løbr”, ”læsr” and ”komr”.)

If you find all this confusing, don’t worry. Achieving a good pronunciation of Danish comes from speaking with Danes. Leaving out the stød entirely is much better than spending time worrying about it! Remember, it is only a soft ”ahem” sound that comes with some Danish words. Many foreign students of Danish pronounce their stød way too harshly (making Danish sound more like Arabic or Hebrew). You shouldn’t try to imitate puking, as people sometimes do when they make fun of Danish… 😉

Without stød • With stød

en anden another one • anden the duck