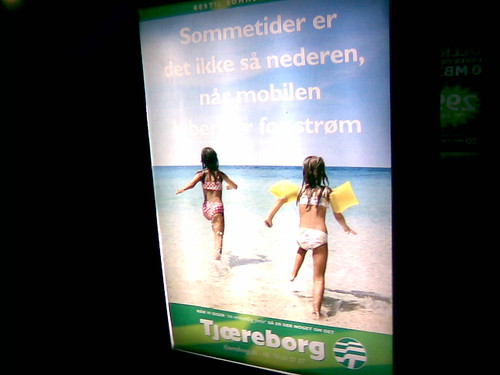 The slang expression ”nederen” has become so common that it’s beginning to appear in the written language – like on this ad from the travel agency Tjæreborg. The text says (as far as I can see the letters!) ”Sommetider er det ikke så nederen, når mobilen løber tør for strøm”. ”Sometimes it ain’t that bad when your mobile runs out of electricity.”

The suffix -er makes magic in Danish as well as English. You just have at tænke, to think, and poof! you’re en tænker, a thinker. You want at flyve (to fly), and there you go: en flyver! Well, okay, that’s not a ”flier”, but an airplane…

The last example is actually shortened from flyvemaskine – airplane (literally ”flying machine”). This shows one of -er’s important functions: to make slang! While flyver has left the slang dictionary and become part of Standard Danish, similarly ”crippled” words pop up all the time, causing foreign learners more stress than you can imagine. (Well, since you’re reading this, you probably can!)
The common word for tv, fjernsyn (television, literally ’far-sight’), gets reduced to fjerner (which sounds exactly like fjerner, removes, and fjernere, farther).
Øvning (training) becomes an øver (”training session”, sounding exactly like øver, ”is training”, and a lot like øvre, ”upper”), and so on…

In 2005, the Tuborg beer brewery launched a humorous string of tv ads that ended in the words DET’ EN OMMER! That roughly translates as That’s an again’er! (”That’s not good enough, you’ll have to do it once more.”) The piece of slang had been freshly coined for the occasion from expressions like at gøre noget om (to do something again). Within a couple of months almost every Dane went around saying DET’ EN OMMER!

In the Danish ’hoods, the ending -en is attached to -er in expressions like:
• Det er bare for grineren! That’s just too fun! (At grine = to laugh)
• Vejret er bare nederen i dag. The weather is just really bad today. (Ned = down)
• Jeg er totalt fråderen. I’m totally hungry. (At fråde = to froth)

You should probably focus on improving your other Danish skills before using these slang expressions! 🙂