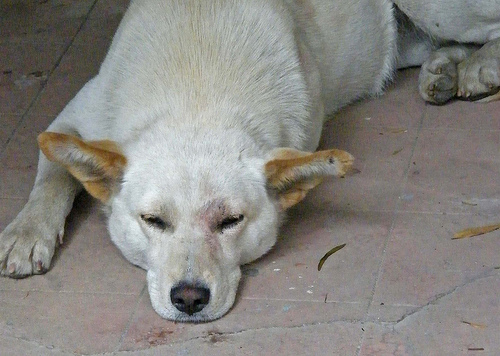 Kan du tale dansk? (”Can you speak Danish?”) Danish and English are related languages. As your study of Danish progresses, you’ll see that there are a lot of things that you already ”kind of know” when it comes to grammar and vocabulary. Nevertheless, the language does have at least one grammatical feature that does not exist in English: the passive verb form.

Instead of saying Jeg drikker vandet (I’m drinking the water), you could go for Vandet drikkes (the water is being drunk). As you can see, such passive forms are very easy to create – you simply take the -r of the present tense and replace it with an -s:
Vi maler huset (We’re painting the house) > Huset males (The house is being painted)
Postbuddet udbringer pakken personligt (The postman will deliver the parcel in person) > Pakken udbringes personligt (The parcel will be delivered in person).

The ”passive -s” is the ultimate way of obscuring the persons responsible for doing something. You CAN say Huset males af os (The house is being painted by us) – in most occasions, though, the active person is simply not being mentioned.

”Passive -s” constructions are a bit formal and are mostly used in the written language. In the spoken language, there is a more common way of stealing the stage from the ones in charge of the action:
1. Pick your tense-of-choice of the verb at blive (to become).
2. Combine it with the ”have” form (past perfect) of the verb you want to passivize.
Since past perfect of at køre (to drive) is har kørt (have driven), Vi blev kørt hele vejen hjem (af taxamanden) means ”We were driven all the way home (by the taxi driver)” (”We got a lift/ride…”). Sprog bliver lært (languages are [being] learnt). Problemer bliver løst (problems are [being] solved). Got it? 🙂

You don’t really need passive verbs to communicate. Ordinary, active phrases should do the job perfectly fine. Yet as you get acquainted with Danes, you’re bound to notice a few of those -s’s:

In these cases, the job of the letter is not to passivize anything. Instead, it adds the notion of reciprocity (”each other”) to the verb.

Vi tales ved! (Talk to you later!, literally: We’ll talk with each other!)