Danes and Dead Animals Posted by Bjørn A. Bojesen on Feb 22, 2014 in Uncategorized

I starten af måneden (at the beginning of the month), København Zoo announced that they were going to kill Marius, a fit and healthy two-year-old giraf [gheeRAFF]. (What? How could anyone be that cruel!) Nyheden (the piece of news) spread like wildfire throughout the Internet. All of a sudden, people i hele verden (in the entire world), and especially in USA, saw Danes as bloodthirsty barbarians. The director of den zoologiske have (the zoological garden) received dødstrusler (death threats), and the American ambassador felt compelled to make a statement in support of the zoo’s decision.

According to the zoo people, Marius was indavlet (inbred). That’s why they couldn’t give him to another zoo. Dyr (animals) in European zoos are bred according to a strict avlsprogram (breeding program) to keep them genetically fit. And the zoo had run out of plads [plas] (space) for Marius to roam.

På trods af protesterne (in spite of the protests), Marius was aflivet (put down) in the early morning hours of søndag den 9. februar. At 10 o’ clock the animal was autopsied in public, and people were invited to take a look at giraffens indre organer (the giraffe’s inner organs). Thereafter, its kød (meat) was given to the zoo’s rovdyr (predators). 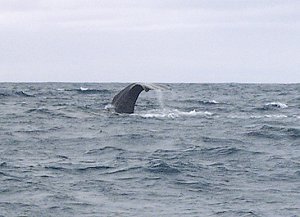 What happens next? Incredibly, a week later en hval strander (a whale is stranded) on Henne strand (beach) on the West Coast of Jutland. Then follows another hval [val]. The two enormous kaskelothvaler (sperm whales) are unable to get back to the deep seas. One is dead and the other is dying.

Within hours, konservatorer (museum conservators) were on their way to bjærge [BYARweh] (rescue) and dissect the two kadavere (carcasses) with a motorsav (chainsaw). Soon, Henne Beach was swarming with people who wanted to catch a glimpse of the whales.

As with Marius, many people were forarget (outraged) by the way the two whales were treated. Locals turned the dissection into a folkeforlystelse (popular entertainment), and people were busy taking fotos of themselves in front or even on top of the big animals. A newspaper wrote: Bedsteforældre tager børnebørn med til hvalpartering. (Grandparents are bringing grandchildren to whale-quartering.)

By now you’ve maybe got the impression that Danes have no respect for animals. There is no way I’ll defend people jumping on a dying whale, but I do think, however, that you should note that few Danes are religious (compared to, for example, Americans). Many people here have a practical ”down-to-earth” attitude to a lot of things, and don’t spend a lot of time being solemn. Animals die, people have sex, so why not accept nature and make a joke about it. (As you’ve probably already guessed, there is a flipside to all this Danish lightheartedness: It sometimes becomes too sarcastic and insensitive to other people’s feelings. Does anyone remember the Mohammad cartoon crisis?)

What do you think? Was it wrong to kill the giraffe? Should we show more reverence for animals, like the dying whales at Henne?