Danish Lessons with Mick Jagger Posted by Bjørn A. Bojesen on Jul 27, 2014 in Culture 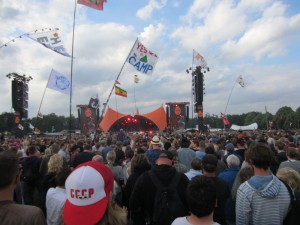 People never leave Roskilde Festival unchanged. Having promised myself on four previous occasions that this would be my last year among euphoric music fans streaming with sweat, I finally couldn’t resist the names on this year’s Festival poster: Rolling Stones, Stevie Wonder. I joined my team of frivillige (volunteers) of the previous years – a multilingual group headed by members of the Danish Youth Organisation for the language Esperanto. This year we were going to be in a bod (booth) selling mad (food) to festivalgæster (festival guests). Roskilde Festival is run entirely by volunteers, so my shifts in the booth earned me an entrance billet [biLET] (ticket).

Roskilde Festival is HUGE (the biggest of its kind in Northern Europe). In the days of the main concerts, which were also the days of my stay, July 3rd to 6th, more than 100,000 visitors were enjoying themselves in front of the 7 festival stages or in the camp areas (enormous plains of grass and mud). If you feel like going for a swim – or don’t feel like standing i kø (in the line) for et koldt brusebad (a cold shower) – there is a lake. If you want to eat or relax or play games with friends, there are restaurants, cafés, art exhibitions, gamerooms, anything. If you haven’t got money to pay for your vegetarian burger, you can collect plastic cups from the concert areas and get pant (refund money). Roskilde is a place that’s bursting with creativity and new ways of doing things; for instance, this year they were trying to make energy out of fry dripping. 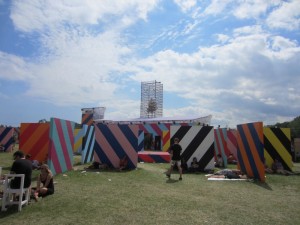 A place bursting with creativity…

Roskilde might not be the best place to learn Danish – after all, a majority of the bands, including the Danish ones, sing in English, and a lot of the informations are given in English. However, Roskilde is an excellent place to get to know Danes! The festival is also a very important ”ritual” in the lives of many Danes, and an invigorating melting pot for Danish culture, music or otherwise.

Most of the concerts I had a chance to attend were great. Okay, there even was a bit of fun for students of Danish:

– Mø is an energetic lady who may be on her way to become the Danish ”Björk”. Mø sings in English, but her name is proudly Danish and means ”maiden”.

– All the foreign artists say Ros-KIL-deh, even though the correct pronunciation of the name is ROSkilleh.

– Mick Jagger may have been browsing Transparent Language’s Danish pages. He paused a lot of times during the Rolling Stones concert to drop a line of Danish to the cheering publikum (public, crowd, spectators). Things like

Hvordan går det, Roskilde? (How is it going, Roskilde?)

Now, get back to those studies. You’ve got a year to fine-tune your dansk for the next Roskilde Festival.