Here’s a terningespil (die game) that’s popular in Danish værtshuse [VARE-ts-hooseh] (pubs). A friend of mine calls it Løgn [loyn] (lie), but most people know it as… 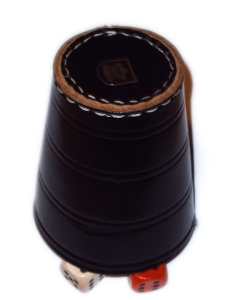 • You are tre eller fire spillere (three or four players – or more, but then it gets harder to keep count of all the dice!) Hver spiller har et raflebæger med fire terninger. (Each player has a dice cup with four dice.)

•  Hvem starter? (Who’s starting?) You decide, and at the same time decide if you want to go med uret [meth OO-oth] (clockwise, literally ’with the clock’) or mod uret (counterclockwise, ’against the clock’).

• Now everyone rafler (shakes their cup and casts the dice). Take a peek at your dice – but don’t show the others! 🙂

• The whole point of the game is to fool people. You bet on how many dice of a kind there are on the table. For example, if you just rolled two femmere (⚄), you may reasonably say ”Der er fire femmere!” (There are four number five!) The next player then has to make up her choice: Does she believe you or not? If she does believe you, she must raise the stakes. She can either raise the number of dots on each die – ”Der er fire seksere!” (There are four number six!) – or raise the amount of dice: ”Der er fem ens!” (There are five identical ones!), ”Der er fem treere!” (There are five number three!), and so on. To ens (two identical ones) is the lowest possible bid; each time a bid is passed on to a player, he has the choice of either raising the stakes or saying ”Det tror jeg ikke på!” (I don’t believe that!) In that case all the cups are lifted. If the previous player was lying, all the other players can now remove one of their dice from their cup. If the previous player was right, she can remove a die along with the other players, except for the doubter, who has lost and has to keep all his dice. The loser then starts a new round, and the game is played as long as there are dice left in the cups.

• Ettere (⚀) are very good, as they’re wildcards! You can choose whichever value (between 2 and 6) you want them to have. Furthermore, if an etter makes a trappe (straight, literally ’staircase’, like ⚀ · ⚁ · ⚂) with all the other dice in a player’s cup, then all those dice are considered wildcards, and an extra ”invisible wildcard” is added: So, rolling an etter and a toer (⚁) is the same as rolling three ettere! If you’ve only got one die left, an etter is considered a straight – so it counts as two wildcards. So, if your opponent has only one die left, and you have only one die left, and your opponent says ”Der er tre ens!” (There are three identical!), she might be right…