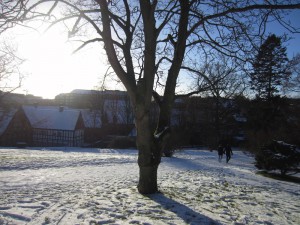 Det sner! (It’s snowing!) The last week or so, temperatures have been dropping all over Danmark. Many places finally got a bit of sne (snow). The region where I live – Midtjylland (Central Jutland) – looked like a postkort (postcard) this weekend, with people playing in the snow and even skiing! 🙂 Today there are only a few klatter (patches) left, but vinteren er ikke forbi (the winter hasn’t ended)! Here’s a handful of snow words. Catch!

• snemand (snow man). Snemænd are happy to be built; less so when solen smelter dem (the Sun is melting them), until there’s only a gulerod (carrot) left, lying on the ground.

• snebold (snowball). Children love at kaste med (throwing) snebolde, and some adults do, too…

• snefnug (snowflakes) are just as beautiful as they sound… There aren’t many Danish words starting with fn-, and fnug [fnook] (fluff, flake) is one of them. Let them fall down on your tunge (tongue). Fnug, fnug!

• snestorm (blizzard or snowstorm). Meteorologer (meteorologists) love snestorme, because they always give’em a chance to act really dramatic i fjernsynet (on tv). Skolebørn (school children) are quite fond of them, too, as skolerne (the schools) are occasionally closed når det bliver for vildt (when it gets too wild)…

• snevejr (snow weather) is any kind of vejr [vare] (weather) when it’s snowing. It’s often perfect for a gåtur (walk), ’cause, as the saying goes: Der er intet i verden så stille som sne. (There’s nothing in this world as quiet as snow.) Other times, however, sneen (the snow) conspires with vinden (the wind) to make a chilling snefog [SNEHfoww] (snowdrift)… Husk hue, vanter og halstørklæde! (Remember your cap, mittens and scarf!)

• tøsne (melting snow or sleet) is the kind of snow that Danes hate driving their biler (cars) through… Danish children, though, hope for some more of the cold, nice frostsne (frost snow) that all of a sudden turns bustling Denmark into a true winter wonderland….