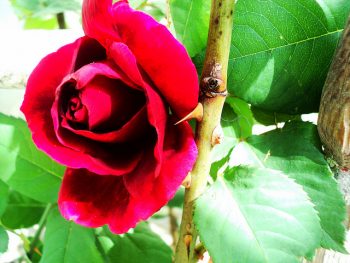 Before the Internet, proverbs were like offline memes that anybody could throw into a conversation to make a point! 🙂 Even though our communication has changed, ordsprog (proverbs, literally ”word-languages”) still exist in many communities, including the Danish-speaking world. I think proverbs are a great window into the original ”mood” or setting of any language, so even if you don’t end up actually using the sayings below, they might help you on your quest to ”think Danish”! 🙂

Tomme tønder buldrer mest. ”Empty barrels rumble the most.” = People with nothing to say, often speak the most. / People often brag to hide their shortcomings.

Ingen roser uden torne. ”No rose without thorns.” = All the great things in life come with some kind of problem attached. (For example: Your amazing new computer makes you spend less time with your friends and family. You fall in love, but one day you have a huge fight with your girlfriend/boyfriend.)

Små gryder har også ører. ”Small cooking pots have ears, too.” = Children understand more than you think, so adults shouldn’t talk too loud about their secrets when kids are around. 🙂

Man skal ikke skue hunden på hårene. ”One shouldn’t see the dog according to its hairs.” = Don’t judge things and people by their look.

En fugl i hånden er bedre end ti på taget. ”One bird in the hand is better than ten on the roof.” It’s better to have something real than a lot of crazy dreams. 🙂

Fra børn og fulde folk skal man høre sandheden. ”From children and drunk people you’ll hear the truth.” Lots of people control themselves and are afraid to say things directly; to hear the truth, it’s a good idea to ask a child or maybe an adult who is too drunk to lie! 😉

Tab og vind med samme sind. ”Loose and win with the same attitude.” Winning and loosing are both parts of life, so stay cool! 🙂