What’s this thing about Greenland? Posted by Bjørn A. Bojesen on Aug 31, 2019 in Uncategorized 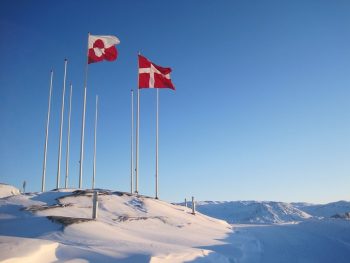 Greenland and Denmark are separate nations, but are still linked by for example Queen Margrethe the 2nd. (Free image from Pixabay, no copyright.)

Although this is an apolitical blog, it’s hard to ignore that there has been a lot of talk about Denmark this month – or rather about Greenland. Without going into politics (which I’ll leave for others), I thought this might be a decent moment to re-highlight the Danish-Greenlandic connections a bit. 🙂

In 2019, Grønland and Danmark are wholly separate lande (countries), with different governments, flag (flags), sprog (languages), drømme (dreams)… Together with Færøerne (the Faroe Islands), they make up Rigsfællesskabet – the Danish ”Commonwealth”. Within this group, little Denmark is still the ”big brother” with responsibility for things like the military. Many people in Grønland (and Færøerne) want full selvstændighed (independence). Other people wish to stay under the Danish ”umbrella” (and keep the bloktilskud – block grant – an annual payment from Copenhagen).

The connections between Scandinavia and Greenland go back to vikingetiden (the Viking Age, 9-11-th century), where vikinger such as Erik den Røde (Eric the Red) sailed west from Iceland and settled in an ”unknown” island. To attract Vikings to the settlement, Erik coined the name Green-land – which sounds funny, considering how white the ice-capped island typically looks on a map! 🙂 But the Viking settlers did find a lot of green fields in the south (at a time when summers were particularly hot). Of course, native grønlændere (greenlanders) were already in the country (which they called Kalaallit Nunaat – the land of the Greenlanders).

When Kalmarunionen – a union of Nordic countries – was created in 1397, the Vikings had disappeared from Greenland. Since the island had been considered Norwegian territory (Erik the Red and many of the other Viking settlers were Norwegian), Greenland too was lumped into the union, which was ruled from Copenhagen. Even after the Kalmar Union broke apart (in 1523), Greenland remained a part of the Danish realm.

For centuries, Greenland was a Danish colony, and many Danish citizens moved to the island – like Hans Egede (1686-1758), a famous missionary. Likewise, many Greenlanders also moved to Denmark to make a living. Those past centuries are not the proudest moment of Danish history, since Greenlanders were often not treated very well or respectfully. Fortunately, with the 2009 selvstyre (home rule), Greenland is no longer a colony, and Greenlanders are busy creating their own future.