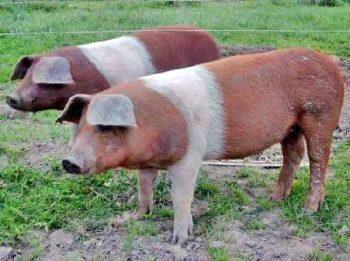 After 1864, Danes in Germany were not allowed to use the Danish flag 🇩🇰 – so they bred the so-called Protest Pig instead! 🐷 (Photo courtesy of Axel Krampe at Wikimedia Commons, CC BY-SA 3.0 license.)

100 years ago, the northernmost part of Germany became Danish – once again. To loud cheers, king Christian X rode his white horse across the old grænse (border) to claim his new land, July 10th 1920. What’s the fuss all about? Away from the border region, many Danes don’t really know – but the celebration is on, despite corona…

For Danish-learners, genforeningen should be an interesting word. Gen- is ”(a)gain = re-”, and en is ”one”, so with a little imagination you may be able to stitch together the full meaning: re-for-one-ing-the = the reunification. (Yeah, in a few cases, Danish works almost like Esperanto – or LEGO bricks – in the way words are built!)

For people in the border lands between Danmark and Tyskland (Germany), the word comes with a ton of political and emotional strings of which outsiders can grasp only 20% or less. At a party with a couple of people from Sønderjylland (the ex-German territory trodden by royal hooves), I asked an innocent – I thought! – question about tyskhed (Germanness) and danskhed (Danishness). Two hours later, the discussion was still raging, and I had to apologize for my insensitivity.

The border region has always been kind of mixed, with lots of dansktalende (Danish-speakers) living on the German side, and several tysktalende (German-speakers) living on the Danish side as well. (Not to forget friserne – the [Northern] Frisians – who used to be numerous but are now few and far between.) You also have people who feel Danish (or German) even though their first language is ”the opposite”. Historically, it has been common to talk about somebody being dansksindet or tysksindet (with a Danish/German disposition) rather than labelling them as strictly dansk/tysk (you might be both or somewhere in-between). 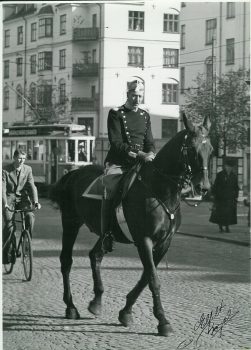 King Christian X on a horse. For his famous border crossing in 1920, he used a white horse. A rumour spread that his horse had been painted… (Photo courtesy of Nationalmuseet at Flickr, CC BY-SA 2.0 license.)

Put shortly, during vikingetiden (the Viking Age), Danish territory covered more of the Jutland peninsula than it does today. That’s why the Viking city of Hedeby and the associated border wall of Dannevirke (to keep the Saxons out of Viking lands) are now tourist attractions in Germany.

In middelalderen (the Middle Ages), Germany didn’t exist yet, but so did the two hertugdømmer (duchies) of Slesvig and Holsten just south of ”normal” Denmark. I’ve given up on understanding all the details here, but at least during some periods the hertuger (dukes) were under the sway of the Danish king in Copenhagen. In the 1840s, when the first Danish grundlov (constitution) was on the drawing table, people couldn’t agree on whether it should also apply to Slesvig and Holsten. (Thanks to Danish TV – DR – for explaining this in an easy way.) The duchies’ upper class, who spoke German, said no, and tensions flared. In 1864, after a brutal war, Denmark lost Schleswig and Holstein (German names) to … well, you know, except that the leading German state back then was called Prussia.

Fast forward to 1918 – Germany has lost WW1. Thousands of Danish-speakers from Schleswig-Holstein have lost their lives fighting for an army they didn’t want to be in. As part of the fredsforhandlinger (peace talks) with the victorious countries, Germany is asked to organise a folkeafstemning (plebiscite – literally ”people’s vote”) in Slesvig, where many inhabitants have been keeping Danish traditions alive. The region is divided into a Northern and a Southern zone, and in 1920, people get to pick the state to which they wish to belong. Sydslesvig, which is largely German-speaking, wants to remain with Germany. Nordslesvig, however, chooses to get back to Denmark.

Today, with open borders and the Internet, it’s hard to understand just how much genforeningen meant to people back then. (It was not about nationalism, my grandfather always said, but rather about fædrelandskærlighed ”love for the native country”).

Still, you can’t understand Danish culture without taking a look across grænsen (the border). Here’s the first verse of a song which TV personality Sigurd Barrett wrote for the 2020 genforening celebrations – to an old and beloved melody:

Frygt for andre har hersket på vor egn her, (fear of others has been ruling our land here,)

når man rummer enhver (when you contain everybody)

og har folket og sammenholdet kær. (and love the people and its solidarity.)