How to Play Buzkashi, an Afghan National Game Posted by Sayed Naqibullah on Feb 11, 2013 in culture 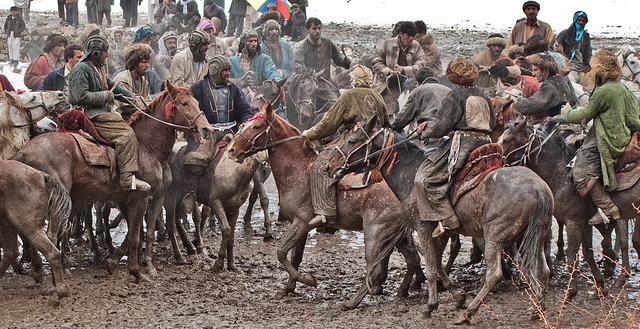 Image by Peretz Partensky on flickr.com

Buzkashi is a Dari word made up of Buz which means goat and Kashi which means grabbing or pulling. It is a game that can be best described when compared to Polo, because Buzkashi is played on a horse’s back. In a Buzkashi game, there are two teams of Buzkashi players and each player is called a Chapandaz. The two teams compete for grabbing the goat from the ground going around a marked area and bringing it back to a circle which is the goal. When a Chapandaz  has a hold of the goat carcass and is taking it to the circle  the members of the other team try to grab the goat before it is taken to the circle. The team member that is able to take the goat from the circle and take it around the marked area, and bring it back to the goal circle successfully scores a mark. Doing so is not easy, because the members of the opposite team will grab the goat and take it around the marked area and then to their goal circle. And that is how the game continues on a horse back.

Afghans are very proud of this game and consider it their National game. It is usually played very often in spring time which attracts lots of Afghans to watch the games, including high ranking government officials. Buzkashi has been shown in several Hollywood movies too. A very recent movie The Buzkashi Boys that is nominated to for Oscar is a good example of those movies, and I recommend watching it.

I know, it is not easy to imagine how Buzkashi is played if you have not watched the game, and even if you have watch it, it is hard to figure out what they are doing because there are ten horses in a fierce competition a lots of running and grabbing and hitting which make it hard to learn how it is played. There are countless videos of Buzkashi online that you could watch, but you won’t find anything that explains how it is played therefore in the accompanying video we will show you how a Buzkashi game is played.

Keep learning Dari with us!