Finding the Esperanto Wikipedia (Part 1 of 4) Posted by Chuck Smith on Dec 21, 2010 in Uncategorized

Welcome to Part One of my series on the early history of the Esperanto Wikipedia!

Today, in the Esperanto community, I am most well-known as the Founder of the Esperanto Wikipedia. But, how did this come to be? Well, one day I was speaking with a dear friend of mine, Scott Moonen, who was trying desperately to convince me that wikis would be the next big thing that went something like this:

Scott: Wikis are websites that anyone can edit and you can link to another page on that wiki by just typing a page with two capital letters that looks like this: CamelCase.
Chuck: Yeah, but who’s going to want to do that? I mean, the page is ugly… there aren’t even any images!
Scott: That’s the beauty of it. It’s just pure text… much easier to work together that way.
Chuck: Meh, sounds lame, but I’ll check it out.
Scott: I’m tellin’ ya, this is the next big thing, you should jump on it now!
Chuck: Sure it is…

So it happened, I took a senior Computer Science class which focused on the then-in-2001 hot topic of Peer-to-Peer (P2P) which basically means anything where the main content is user-created, rather than the old-fashioned hierarchical system with an editor who chooses what content goes into the system. That year, I chose to do my senior project on wikis. During my research, In April 2001, I came across the WikiPedia (founded in January 2001)! Man, what a joke that was. Someone is trying to use a wiki to create an encyclopedia. How cute! Hmm, here are the states and I see there’s no article yet for Pennsylvania. Well, that’s easy, I can start that one, and I wrote, “Pennsylvania is a big, boring rectangular state.” That was my first edit on Wikipedia.

After that I didn’t really give it much thought. Then, somehow in September I heard about it again. Ok, let’s see how this joke is coming along. Click. Click, click. Click, click, clickety, click, click. You know the Wikipedia syndrome. Just can’t stop reading, jumping from topic to topic… this blew my mind! How can this joke of a website that I saw in April actually be working?! Even in September there was very little vandalism and people were taking this project very seriously. 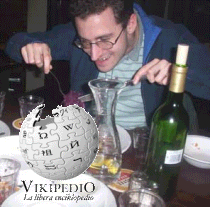 After seriously contributing for about a month, I noticed there were other language projects in Wikipedia. The popular ones: Spanish, Polish, German… hmmm, Japanese and Russian writers can’t even type their own language, but have to use codes instead, since the software doesn’t support their scripts. Ugh. Oh look, there’s Esperanto, that cool international language I’ve been learning since February! Click. Tio cxi Wikipedio estas en Esperanto. This Wikipedia is in Esperanto. That was it. For those who can read Esperanto, you’ll even notice the two errors in the Esperanto text.