German Esperanto Association to win €1000? Posted by Chuck Smith on Nov 4, 2011 in Uncategorized

A bank is now running a campaign to donate a million euros (US$1.4 million!) to non-profit organizations in Germany. Their idea is to donate a thousand euros to the thousand most liked organizations. Martin Schäffer entered the German Esperanto Association (GEA) into the contest. In the beginning, it was unclear whether people outside Germany would be allowed to vote, but then they confirmed that voters can be from anywhere in the world. 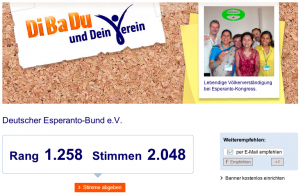 Contest rules state that each Internet user can vote up to 3 times for an association. However, 7 days after the first announcement, GEA only had 717 votes. At that time, GEA managed to move up 7,000 places in the ranks among the 18,000 competing organizations, but only reached 1,734th place. It helped to move the support request abroad, but even then, not as much as expected. The following week, after the international announcement on Oct 31, 2011, GEA is now ranked around #1,250 and has a little over 2,000 votes.

If GEA wins, it will use the money to support Eastern Europeans who want to travel to Germany for Esperanto events. This will give people who ordinarily wouldn’t have the chance to practice their Esperanto, the chance to have international contacts as well as to enrich the experience of others attending these meetings. This follows the same principles as the World Esperanto Youth Organization’s (TEJO) fund called Partoprenu IJK-n.

Will they be able to collect enough votes by the end of the voting period (Nov 15, 2011) to be among the top thousand? To reach that, they should just need around 500 more votes. Will it be possible to conquer the pessimism people have toward online voting? Will it still be possible to motivate enough people? It shouldn’t be a problem, because friends and family members can also help. Yes we can… and you can help!

Here is a direct link to vote. For help understanding how it works, you can find instructions in English, Esperanto, Spanish or Portuguese.

Do you know of any other innovative fund-raising activities from other Esperanto organizations or clubs? How does your club or organization finance their work? I look forward to reading your comments and hope the campaign succeeds!