Interview about Utopia in Four Movements Posted by Chuck Smith on Dec 6, 2010 in Uncategorized

Last week when I was in Amsterdam, I had a very unique opportunity to see a live documentary. Now, you may be wondering, how does that relate to Esperanto? Well, the documentary is called Utopia in Four Movements and one of those movements is Esperanto! Sam Green explains his idea[l]s behind the movie and future projects.

Could you explain what a live documentary is and what inspired the idea? 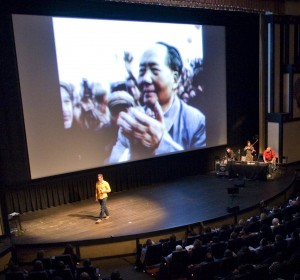 I call my new documentary Utopia in Four Movements a ‘live documentary’ because I narrate the film in person and cue the images from a laptop. Meanwhile a live band, The Quavers, perform a soundtrack as the film plays. This can be seen here on the left to help you visualize it.

I’m very taken with this form for a number of reasons. Primarily, it comes out of the subject matter. Filmmakers today have to either accept the fact that people will watch their movies on a laptop or iPod or do something that can’t be reduced to that format. I love the Internet – don’t get me wrong – but I think that seeing a movie in a theater with other people is a much more meaningful experience. Ultimately, the idea of a bunch of people watching this movie alone on laptops seemed kind of tragic to me. After all, utopia is almost always about a collective experience. So making a live documentary – one that you see in a theater with friends and other folks – a movie that is never the same twice – felt right.

Why did you choose these four topics to present utopia?

The movie looks at four different stories that all seem to be about utopia in one way or another. Some of the stories are more explicitly about utopia than others. First is the story of Esperanto. Then a section about an American revolutionary living in Cuba. The third part is about the world’s largest shopping mall in China. And the final section is about something called forensic anthropology which in many ways represents the violence and conflict of the 20th century. Hopefully, all of this together creates a poem or meditation on the world today and our feelings about hope and the future.

It can be argued that your film in some ways presents a bleak outlook on the future while at the same time inspiring hope in changing that. What was your intention showing these contrasts?

I hope that this film inspires hope, but in a complex manner. A complex kind of hope. These are difficult times in which we are living. I read the paper everyday and constantly struggle with feeling despondent. It’s hard to have your eyes open and still be hopeful. For me, it’s important to look clearly at the world, and also at the historical context that weighs on us, and then to figure out ways to have hope. This is complex hope – hope that can survive over the long haul. A good friend of mine Rebecca Solnit wrote a book a few years ago called Hope in the Dark: Untold Histories, Wild Possibilities

. In it, she says, “To hope is to gamble – it’s to bet on the future, on your desires, on the possibility that an open heart and uncertainty is better than gloom and safety. To hope is dangerous, because to live is to risk.”

I know many Esperanto speakers are dying to see it and just don’t hear about the showing in time. Is there any “tour” page where we can see where you’re playing next? 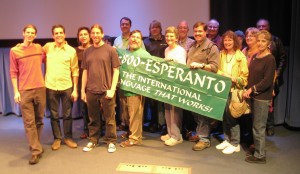 Esperanto speakers were present at the Seattle screening

We have a website for the film: www.utopiainfourmovements.com There’s a page called screenings where we list upcoming shows. We are always happy to have Esperantists in the audience. At the Seattle screening, we were pleased when a dozen Esperanto speakers showed up for the performance!

I heard that you’re now working on a half hour documentary that will be even more positive about Esperanto than Utopia. Can you confirm this rumor?

Yes, it’s true. The film is called The Universal Language. It will be finished in early 2011. It features interviews with Humphrey Tonkin, Renato Corsetti, Arika Okrent, and many Esperanto speakers I met at the Universal Congresses in Yokohama and Rotterdam.

Are you planning to eventually release a DVD?

What other projects are you currently planning?

I am working on a long-term documentary about fog in San Francisco. And then I have some other projects that I’m working on but are too early in the process to talk publicly about.

Thank you very much for the interview and I wish you the most success with your films!