Meet an Esperanto intern Posted by Chuck Smith on Jan 8, 2013 in Uncategorized

While at the Youth Esperanto Week, I ran into John Bauer, who has worked for an Esperanto organization called E@I (Education@Internet), which is best known for their Esperanto learning website Lernu!. Here is his tale of moving to France and how Esperanto brought him to an internship in Slovakia! 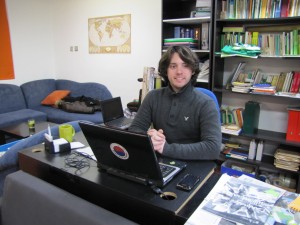 Mia nomo estas John Bauer kaj mi estas de Usono. My name is John Bauer and I’m from the USA. My history in Esperanto is not very long, but it has proven to be quite interesting. I started learning Esperanto less than a year ago while learning French and preparing applications for French grad school. Once I got into a master’s program in France, I learned that I would have to do an internship abroad (i.e. outside France). The vast majority of French students take this as an opportunity to go to an English-speaking country to improve their English, and the vast majority of French professors push for this, so that students can improve their English… but that was obviously not needed for me. It was during this frantic search that I stumbled across an announcement for an internship in Slovakia for an Esperanto organization unfamiliar to me: E@I.

At the time I didn’t even know where Slovakia was on the map, and the first thing my mom asked me was, “Don’t you mean Czechoslovakia?” I quickly learned where Slovakia is and a bit about its history, because before all I really associated with the region was communism and war. However, I was quick to note that communism is gone and Slovakia gained their independence peacefully without a war. I still didn’t know a word of slovak though and would have to rely on Esperantists to get by or mash through with English. 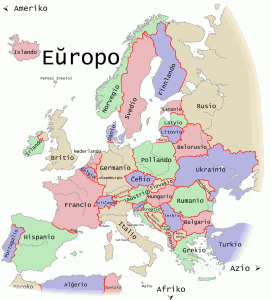 Can you find Slovakia? (taken from Wikipedia)

Before the internship, I still didn’t have any kind of a decent level in Esperanto, but it seemed like a good way to justify my time spent learning the language. A whirlwind of a few weeks later and I’m getting off the bus in Partizánske speaking Esperanto in the flesh with my new boss and coworker. It was surreal for the first few weeks to use Esperanto in all my day-to-day functions, especially because I had learned most of what I knew by reading random books and Wikipedia articles. So while I could say, “This verb isn’t conjugated correctly,” I had trouble saying, “Pass the spoon, please.” With each day things became easier though, and I quickly got the hang of things. I even got used to speaking Esperanto in public, which had seemed oddly strange to me just a few weeks before.

Life in Slovakia also proved to be an interesting experience. I had come from France and thought that it was still in Europe so it must be somewhat similar. While there are still some European aspects to Slovakia, the culture is very different from Western Europe. I have travelled around a bit in Asia and at times Slovakia feels more like Asia than Europe! As an example that sticks out to me, go to your local Asian grocery store and that is more similar to what a grocery store looks like in Slovakia than your local supermarket.

At the office, I spend most of my time working on translations of websites or learning materials, while enjoying the relaxed atmosphere of a tech office. I also do whatever small intern tasks are asked of me with the twist of it all being asked in Esperanto. A big part of my master’s is translation, but I don’t have a lot of practical experience with it, so this has been a great way for me to gain some experience in the field. One particularly large task I had was to expand the English Wikipedia article on E@I, basing it on the Esperanto version. It took some time, but I rather enjoyed getting into it and getting stuck on a certain sentence that just didn’t want to be translated. I enjoy the small details in general, fine-tuning a translation so it doesn’t just convey the information, but is presented in a way that sounds natural to the speakers of the target language. 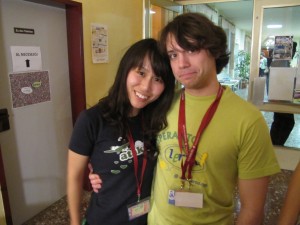 While I enjoy the office and the work I do there, the real fun are the events E@I is either invited to or organizes. I had never been to an Esperanto event before my internship and have now been to three. The first one was KAEST (Conference on the Application of Esperanto in Science and Technology), E@I’s own conference. After a few smaller events in Slovakia, the next big event was the Youth Esperanto Week (JES) in Germany. While JES isn’t run by E@I, we are present there, and I spent a lot of time selling books and t-shirts at our Libroservo (book service), having to play a salesman in Esperanto! JES was great for me too because my girlfriend and I were able to attend thanks to the scholarship, JES al novuloj. The last event I went to for the internship was a smaller one in Slovakia, and while I was unfortunately sick for nearly the whole event I still managed to have fun all while doing my internship.

I really am surprised how much fun it’s been both inside and out of the office. I also never would’ve thought that I’d have a chance to use Esperanto in a workplace, but here I am.