Lions and Tigers and Bears

Esperanto is an international language. That means it’s usually pretty easy to talk about concepts that are basically international. Anywhere you go, it’s safe to assume that people will be familiar with certain plants and animals, so we really don’t hesitate over words for animals like leono (lion), tigro (tiger), and urso (bear), or for fruit like pomo (apple), ĉerizo (cherry), banano (banana), or vinbero (grape.)

The trouble begins, however, when we need to talk about animals or plants which are not internationally known. 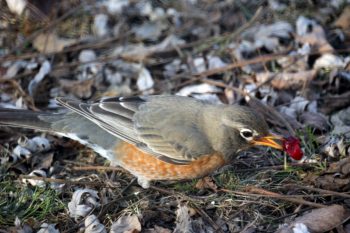 In some cases, however, the thing we want to talk about isn’t all that international, or for some other reason doesn’t have a clear and obvious name in Esperanto. One example that came up while discussing Transparent Language’s Word Of The Day feature is the word robin.

If you look up robin in an Esperanto-English dictionary, there’s a pretty good chance you’ll find the word rubekolo. This refers to Erithacus rubecula. The European robin. If you grew up in North America (like I did), you’re probably thinking of turdus migratorius, pictured above. The two birds are not closely related. The American robin is actually a kind of thrush. When I see a robin near my home (in North America), I call it turdo, which is a general word for all thrushes.

This division between Old World and New World causes confusion with fruits and berries as well. The Esperanto word mirtelo (blueberry) can refer to different but closely related berries, one of which is more common in Europe. In this case, it’s safe to call them all mirteloj.

I was recently set straight with regards to two different berries called “cranberry” in English. I’d learned that the species of cranberry that you get in the US is different from that which you’ll find in Europe, so for years, I referred to them by different Esperanto names. It turns out that both species are native to North America and are very closely related. Since both are members of the same subgenus (“Oxycoccus”), I’m finally comfortable calling both by the name you will most likely find in a dictionary – oksikoko.

In contrast, kukurbo (which, by the way does not mean “city of cake”) can refer to a number of different kinds of squash, including pumpkin. It’s tempting to ask “well, then how do you tell the difference?” I know at least one Esperantist who felt so strongly about this that he made up his own word for pumpkin. My solution is simply to describe the kind of squash if there’s any chance of confusion. (Most of the time I buy it frozen anyway so I don’t really know what kind it is.)

Make up your mind

Another thing that comes up is that some animals have more than one name in Esperanto. Lavurseto/prociono (raccoon), flamingo/fenikoptero (flamingo), nazurso/nasuo (coati). Often one name is a translation of a national language name and the other is based on the scientific name. I generally prefer the scientific name, but in some cases the other name is more common, so I prefer that one; I don’t think anybody other than Zamenhof ever called a formikurso (anteater) by the name mirmekofago.  In some cases you really need to learn both names (Lavurseto/prociono is a good example of that). Occasionally you’ll find a word in the dictionary that nobody ever uses. For example, a skunk is always mefito. Skunko somehow made it into some dictionaries, but nobody ever uses it.

There’s no one way to find the best name for a plant or animal, but once you’ve found a name in you bilingual dictionary, it’s a good practice to check PIV to see how it’s defined there. If a scientific name is given, google it to see if it’s the same plant or animal that you’re thinking of. It certainly doesn’t hurt to ask around. Esperanto is known as an easy language, but certain aspects can be tricky – and knowing what is international and what is not is one of the challenges – and benefits – of knowing Esperanto.