Trains and Esperanto? Posted by Chuck Smith on Jan 26, 2014 in Uncategorized

A little while ago, I read that there are now discussions about whether to build a 500 kph (300 mph) maglev train from Washington DC to New York City. When this starts running, you could then travel between these two cities in just an hour, completely revolutionizing possibilities along this corridor. Also, since both cities have excellent rapid transit networks, travelling by train would be nicer than dealing with the hassles of travelling by car like traffic, finding gas stations and finding parking in a metropolitan area.

Living in Berlin, I am fortunate enough to have a high-speed network practically at my backdoor. For example, yesterday I went from Berlin to Duisburg in just 4 hours, at speeds going up to 300 kph (180 mph) crossing the entire country from east to west. Over Christmas, I visited the USA and was disappointed with the transportation options available there. That’s why I took MegaBus from Philadelphia to Harrisburg. Hey, at least it was cheap, since the first ticket on every route is just $1.50 (incl. credit card fee).

Already in 1909, the Internacia Asocio de Esperantistaj Fervojistoj (literally fer-vojo means iron-way) was founded to help connect Esperanto-speaking train workers across countries. If you could think of which occupation could find Esperanto the most useful a hundred years ago, I think people working on trains would be one of the top occupations for that. They disbanded during World War II and came back as the Internacia Fervojista Esperanto-Federacio, which is still active today!

Other Esperanto speakers remember the enjoyable long-distance train trips to Esperanto meetings by train. A group from Paris always finds a way to get cheap group tickets on local trains to the biggest Esperanto events. Then, people who want to attend these events can see their schedule and see where they can “jump on” in the middle of their trip. It’s a great pre- and post-conference with chatting, singing and playing cards before the great event. 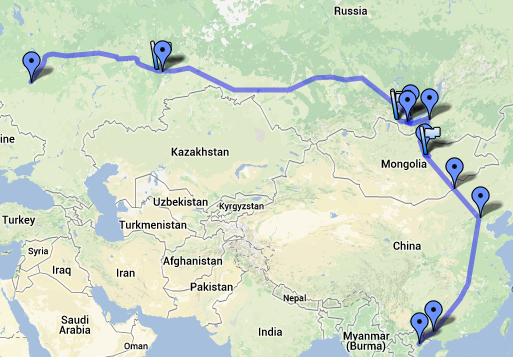 Even more unusual was the Trasiberia Karavano, which turned a train ride into an Esperanto event! 22 brave souls decided to take a train from Moscow to Hanoi (Vietnam). The trip took place on Jul 9-28, 2012 arriving just in time for the Universala Kongreso in Hanoi. In any case, no matter how you use Esperanto, it’s likely you’ll run into a train at some point along your journey!