What do traditional Persian restaurants offer? Posted by Farangis on May 13, 2021 in Culture, History, Language, Vocabulary 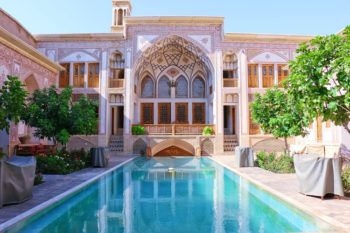 Photo by Morteza F.Shojaei from unsplash

سفره خانه consists of two words; the word sofreh سفره which translates to a cloth or spread used for both everyday meals and formal celebrations, and the word khaane which translates to home. The traditional daily sofreh is placed on the carpet and is the gathering place for the family meal.  These traditional restaurants resemble the sense of home and Iranian culinary traditions and culture.

سفره خانه ها usually offer daybeds, carpets, and colorful cushions. The food will be served on those Iranian traditional daybeds! If you can tolerate sitting on daybeds and have your meal, you will be fine, if not, you need to search for some sofreh khaaneh where tables and chairs are available too.

The food offered in سفره خانه are derived from the taste of different ethnic groups in the country: a variety of stews, khoresh خورش  , rice, berenj برنج and well-known foods of various cities such as Mirza Ghasemi میرزا قاسمی and desserts such as traditional ice cream, bastani sonati بستنی سنتی, Shirazi faloodeh فالوده شیرازی, and tea and dates. Most dishes were made of pottery and glaze with traditional designs and motifs that make for a cozy, rustic, and authentic setting.

You may also find some of the traditional restaurants where they offer poetry readings by narrators in traditional costumes. These narrators are known as naghal نقال.

And Naghali نقالی is the art of performative and dramatic story-telling. نقالان tell stories of ethnic, national, religious epics, and quasi-historical and religious historical events with melodic words and warm expressions.

نقالان chant their words, raise and lower their hands in a timely manner to attract people’s attention and convey their emotions. Among all the literary works, Shahnameh شاهنامه has received the most attention throughout Iran’s history.

The narration of Shahnameh stories was intertwined with the history of coffee houses قهوه خانه ها (modern teahouses چایخانه) in Iran.

Stay tuned for my upcoming blog about traditional coffee houses in Iran.

Among all the stories of Shahnameh, the story of “Rostam and Sohrab”  رستم و سهراب has gained a very significant place.

Each سفره خانه can be designed in a unique way, some have the type of flooring that resemble Iranian carpets, some have a stream of water around their daybeds which would allow you to immerse yourself in a peaceful and tranquil experience.

The outdoor سفره خانه ها are also popular and many people gather in those places to enjoy the scenery. Many outdoor سفره خانه face rivers or water display aab namaa آب نما. Water can be considered as one of the most important elements in Iranian architecture and revive Iran’s history all the way back to Zoroastrians’.

Keep learning Farsi with us!