A Trip to Paris: Visiting the French Capital’s Most Famous Attractions (Part 12) Posted by mtaulier on Dec 23, 2013 in Culture

We have reached the final installment of our series. I hope you have enjoyed learning about the different tourist sights, but most of all I hope you will be able to benefit from this information if you ever travel to Paris. Remember that these sights represent a small portion of all the attractions in Paris. They are by far the most popular but there is much more to see and you should take the time to explore the city on your own. Paris, like most major cities, is full of interesting landmarks, monuments and museums that will never leave you wanting for more. Most native Parisians have never fully explored their own city, so if you are visiting for just a few days, or even for a couple weeks, you will never run out of things to see or do. 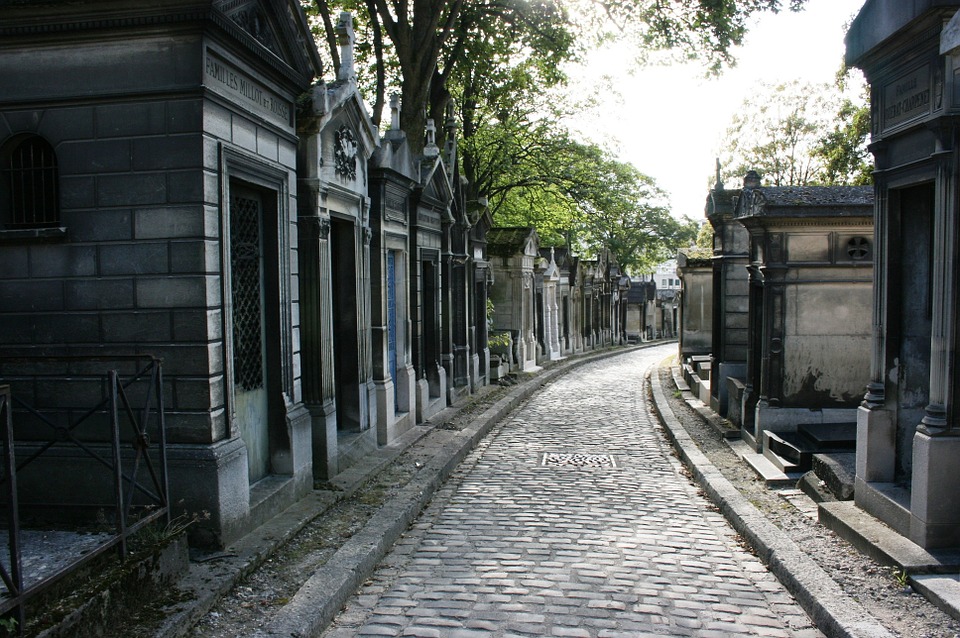 Aujourd’hui nous allons visiter un cimetière (Today we will be visiting a cemetery). You’re probably asking yourself mais pourquoi un cimetière, pourquoi pas un autre monument historique, un musée, par example (but why a cemetery, why not another historic monument, a museum, for example)? That’s because le Cimetière du Père-Lachaise (the Father-Lachaise Cemetery) is one of the most famous landmarks in the world and one of the hottest tourist spots in all of Paris with over 3.5 million visitors a year. Estimates on the number of people interred at the cemetery vary between 300,000 and 1 million. It also happens to be the largest cemetery in Paris covering an area of 100 acres surrounded by over 5,000 trees. So yes, it’s a big place.

But don’t think of visiting a cemetery as something morbid or lugubre (dismal). For some people, le Père-Lachaise cemetery is the first stop on their tour of Paris, taking precedence over more famous landmarks like the Eiffel Tower. The reason this particular cemetery is so popular is because it is the resting place of a grand nombre de personnes célèbres (large number of famous people). Many of these notable figures are French, of course, but there are quite a few  qui ne sont pas Français (who are not French). Some of the most frequented graves include those of Jim Morrison (lead singer of the American band the Doors), Frédéric Chopin (19th century Polish-French composer and pianist), Molière (17th century French playwright), Georges Seurat (19th century French Post-Impressionist painter), Edith Piaf (20th century French singer), Oscar Wilde (19th century Irish writer), Peter Abelard and Héloïse (whose remains date back to the 12th century) and many, many more. For many, the Père-Lachaise cemetery has become the final destination on a pèlerinage (pilgrimage) to pay homage to some of the most influential people of the last few centuries.

Even if you have no interest in visiting the graves of these famous people, there is another reason why the cemetery might be worth a visit. The sheer diversity of grave sites is astounding. They come in all shapes and sizes. Some are modern, while others are built in the style of centuries past. Some are simple unadorned headstones while others are imposing and ostentatious, perhaps a reflection of the person’s status and character when they were living.

The cemetery is named after Father François de la Chaise, un prêtre Jésuite et confesseur du roi Louis XIV (a Jesuit priest and confessor to king Louis XIV) in the 17th and early 18th centuries. Napoleon I established the cemetery in 1804 to alleviate the overcrowding in smaller cemeteries around Paris. Designed by Alexandre-Théodore Brogniart, the Pére-Lachaise cemetery became the cemetery to be buried at if you were a person of wealth and stature living in Paris.

Perhaps the single most important reason to visit Père-Lachaise is to pay homage to those fallen in war and to the victims of the Holocaust. Paying respect to famous figures in this cemetery is to celebrate their lives and achievements, but these individuals represent a minuscule portion of the millions who have died in war or as Holocaust victims. These monuments aux morts (monuments to the dead/memorials) are there pour nous rappeler les horreurs de la guerre (to remind us of the horrors of war) and the tragedy of genocide. What is the purpose of history if not to learn from our mistakes? So if you came to Père-Lachaise simply to see the graves of Jim Morrison, Edith Piaf or some other celebrity, take a moment to stop by the other monuments dedicated to those whose names and achievements are lost forever to time.