I arrived in France for the first time at the end of July (‘fin juillet’). I was jet-lagged, confused, and a little scared at the prospect of spending the next year so far away from everything and everyone I had grown up with back in the US. Before I even had time to settle in though, my new host parents packed me, my host brother Fabrice, the three dogs, and la grand’mère up in the car to drive 5 hours away from our house in the suburbs of Paris to their beach house in Saint Lunaire. It was August (‘août‘), which in France means vacation. And my family, like so many French families do every year, was trading the stress of work and the heat of the city for four weeks at the shore. 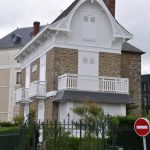 My home for the summer . . . now closed up for the season.

Saint Lunaire is a beach town on the shores of the English Channel (‘la Manche’ in French) en Bretagne (Brittany), the western-most region of France. My host parents both grew up en Bretagne and the house here originally belonged to my father’s parents (‘les parents de mon pere’). Like all the houses in the area, it was built of stone with a tile roof, and had a lovely quiet garden in the back (where I would often sit, trying to muddle my way through one of the many BDs I was hoping would help me improve my French!). It was also, much to my delight, situated right between the town’s two beaches. 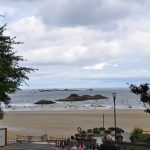 Every day started at the beach (‘la plage’) at le Grand Hotel (le Grand Hotel, built in 1881, was the town’s first and most important hotel until the 1950’s when it was converted into private apartments). Going to the beach for me meant flip-flops, bathing suit, and a t-shirt . . . but not in France. Despite the two beaches in town, you never saw anyone in the streets in beachwear. My family and I (and everyone else), would get dressed up in our pants and shirts (skirts or dresses for the women), shoes (and socks), as if we were headed out for a day in town just to walk the five minutes to the beach where we would then change, in tiny cabins lining the shore, into our bathing gear! As noon approached, we would reverse the process for the walk home for lunch . . . and then repeat the hole process over again in the afternoon! 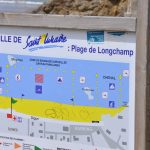 Our days generally ended at the other beach in town, ‘la plage de Longchamp’, from which we could watch the sunset. After a long day in the sun, trying my best to understand everything going on around me and to participate in the conversations with my limited French skills, I was generally just about exhausted. But growing up on the east coast of the United States I had never had much opportunity to enjoy a proper sunset and the spectacle of the setting sun over the ocean waves always seemed to quiet everyone, and provided us with time to reflect on the day, and to commune and enjoy each other’s company even if we weren’t able to really communicate yet.

Saint Lunaire’s beaches are a real treasure, but if beaches aren’t your thing, Saint Lunaire is just a short drive from loads of great places to visit. In case you ever have the good fortune to find yourself in this part of the world, I thought I’d share some of my favorites with you.

Nearly destroyed in Allied bombings at the end of World War II, St. Malo is a charming sea-side town filled with shops; typical restaurants serving crepes, galettes (the local savory buckwheat flour based crepes best, in my mind, served with ‘un œuf, jambon, et fromage’ … an egg, ham, and cheese!), ‘des huitres’ (oysters), and other ‘fruits de mer et poissons’ (seafood and fish); a beautiful Romanesque and Gothic style cathedral; and of course the stone walls encircling the city. St. Malo was once home to royally-sanctioned pirates (knowns as privateers) and is the birthplace (and final resting place) of the French author Chateaubriand.

One of my favorite places in France is the Mont St. Michel. I first fell in love with it when Fabrice and I went there during our month in Saint Lunaire. The Mont St. Michel is actually in Normandy, 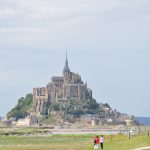 but just at the frontier between Normandy and Brittany, it’s an easy drive from Saint Lunaire. My 16-year-old heart and mind – steeped as they were at the time in Arthurian legends of Merlin and the knights of the round table*, the Hobbit, and other stories of castles and kings – felt a sort of kinship with this castle-like ‘abbé‘ perched atop an island/hill just off the coast.

The highlight of any visit is the Abbey itself, sitting high above the surrounding ocean. You can tour the Abbey by day or, for a more “romantic” experience, at night. The walk up the steep main street to reach the Abbey takes you past numerous restaurants, shops, and galleries where you can sample the local food and purchase souvenirs and local crafts. 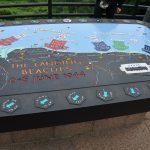 A map of the D-Day landing beaches.

Caen, like le Mont St. Michel, is actually in Normandy, but it is home to Le Mémorial de Caen museum dedicated to WWII and the Battle of Normandy. Caen is not far from the D-Day beaches, where you can still see evidence of the enormous military “invasion” of Allied troops on June 6, 1944 that led to the liberation of Europe, and to the various allied cemeteries.

* Speaking of King Arthur and Merlin, Brittany is also the reputed home of ‘la foret de Brocéliande‘, site of many events from the tales of the Knights of the Round Table including, according to legend, the location of Merlin’s tomb!