French Baguettes Posted by Elizabeth Schmermund on Jun 13, 2016 in Culture

If I were to ask you what basic food the French are known for, what would you say? Many of you would respond that the French are famous for their cheese, which is true. A famous saying in French states that there are 365 different French cheeses–one for each day (il existe un fromage différent pour chaque jour de l’année). I’ve actually heard that there are up to 450 distinct French cheeses, so much that you’d have to try multiple cheeses a day to try them all in a year! 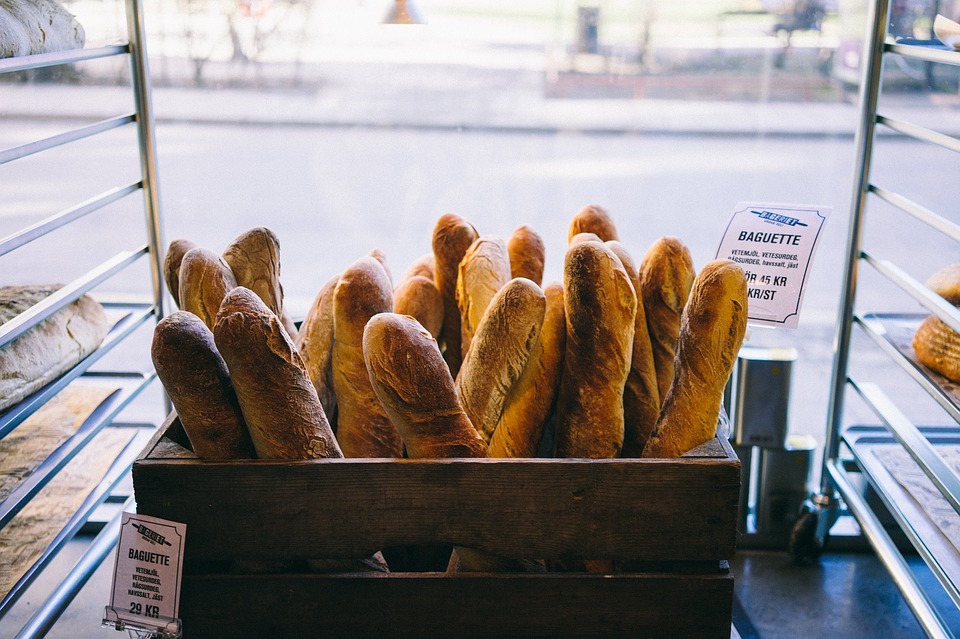 But the French are just as well known (and perhaps better known) for another food: bread and, particularly, the French baguette.

What is a baguette? A baguette is a long, thin loaf of bread that is very crusty on the outside and somewhat chewy on the inside. There are many kinds of baguettes, including la baguette de tradition (or la trad), la baguette farinée, la baguette parisienne, and la baguette moulée.

La baguette parisienne uses white flour and baker’s yeast; most of these cost approximately 1 euro or less per baguette.

La trad is hand-formed and, instead of using yeast, uses levain, otherwise known as sourdough starter. This kind of baguette is highly regulated and can only contain four ingredients: flour, leavening, water, and salt. These typically cost more than 1 euro.

La baguette farinée is paler than other kinds of baguettes, as its crust is covered in flour.

Finally, la baguette moulée is typically manufactured in an industrial baker’s oven and has fine-latticework on the bottom.

This traditional bread dates back hundreds (if not thousands) of years, but was revitalized in Parisian bakeries in the 1980s and 1990s. Bakers use traditional techniques to make this bread, which means that they cannot freeze the dough or use any additives. Most bakers use sourdough starter, although some use added yeast, or poolish (a liquid starter that is begun several hours before baking).

I began my sourdough starter last week and have to wait a couple more days to try and make my first baguette de tradition. Sourdough starter is pretty easy to begin, although it does require patience. You mix 4 oz. high-quality flour with 1 cup of non-chlorinated water and cover loosely. Every day you “feed” the sourdough starter, discarding half of the mix and adding in another 4 oz of flour and 1 cup of water. Do this until the mixture begins to bubble on the third day, which shows that the fermentation process has begun. Then you can “feed” the sourdough every twelve hours. When it doubles in size (typically by day five), it is ready to use in your baguette recipe. Once you have your starter, you can keep it in your refrigerator for life as long as you continue to feed it weekly and discard the excess.

Of course, the actual baking of a baguette can be quite tricky. Take a look at this recipe and leave your questions or, if you’re brave enough to bake these baguettes or are already an expert baguette baker, your comments below! I’ll be trying my hand at the recipe in several days.