Ghosts’n’Goblins: The Origins of Halloween Posted by mtaulier on Oct 31, 2014 in Uncategorized

Today, children all over the United States will be donning their déguisements (costumes) and at crépuscule (dusk) will be headed out the door to make the rounds of their neighborhood to celebrate Halloween. 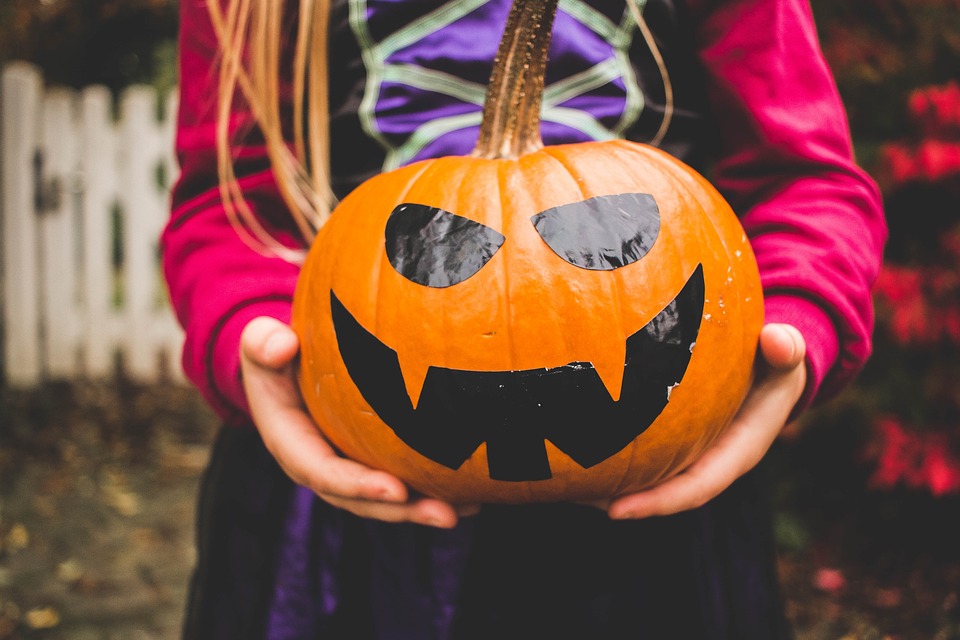 Mais d’où vient cette tradition (But where does this tradition come from)? What exactly is Halloween? And does France even celebrate it?

Halloween, also called Hallows’ Eve, has roots in l’histoire ancienne (ancient history). It can trace its lineage back to the Celtic calendar festival of Samhain (literally “end of summer” in Celtic) in Ireland and Britain. November 1 was set apart as the day to commemorate la fin de l’été (the end of summer) and to celebrate les morts (the dead). The emphasis on the supernatural during Samhain gave the festival an aura of peur (fear) during which people made sacrifices to the Celtic gods who played tricks on them. Fires were lit to ward off spirits and disguises were often worn pour se cacher des fantômes (to hide from ghosts).

The Roman festivals of Feralia merged with the rituals of Samhain when the Romans conquered the Celts in the 1st century A.D., thus adding to the mystique and folklore of Halloween.

Six hundred years later, La Toussaint (literally “All Saints’” Day) was promulgated by Pope Boniface IV and was to be celebrated on May 13. Families would gather to pay respects to loved ones they had lost and to honor the saints. Durant le Moyen-Âge (During the Middle Ages) the Catholic Church was the most powerful institution and in the 8th century, Pope Gregory III changed the date of La Toussaint to November 1, possibly to overshadow the pagan holidays. October 31st of every year became a “hallowed evening” and thus the term “Halloween” came into being. Today, November 1st continues to remain un jour férié (public holiday) in France where schools, restaurants, post offices, banks and other businesses are all closed. A similar tradition to La Toussaint takes place au Mexique (in Mexico) between October 31st and November 2nd called Día de Muertos (Day of the Dead) when those belonging to the Catholic faith visit les tombeaux (the graves) of their relatives to pay their respects.

Britain and Ireland continued celebrating Halloween as a secular holiday beyond the Middle Ages. British and Irish immigrants brought Halloween to the United States beginning in the mid-19th century and since then Halloween, much like Noël et Pâques (Christmas and Easter), has slowly morphed into a commercial “holiday” filled with costumes, trick-or-treating and copious amounts of bonbons (candy).

In France, Halloween has garnered little attention and is mostly a pretext for people to dress up and attend costume parties. Absent are the typical American costumes (superheroes) in favor of more macabre disguises (ghosts, zombies, etc.) typically associated with Halloween. Halloween remains an obscure holiday in France but you might find Jack-o’-lanterns and other decorations behind the windows of businesses and homes.

Will Halloween ever become a popular tradition in France? It is doubtful. But the next time someone asks you about Halloween, you can impress them with your knowledge of its origins. If anything, it makes for good conversation.