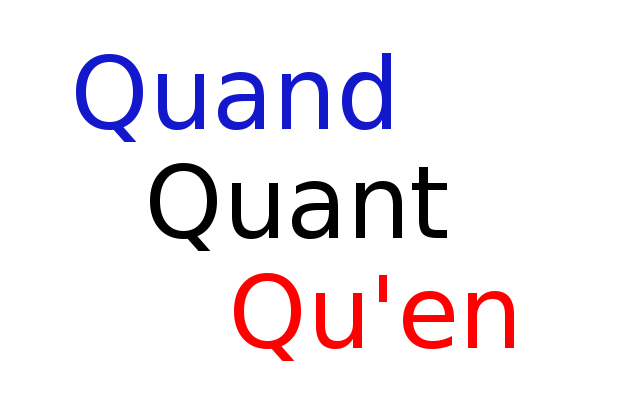 Un phénomène intéressant (an interesting phenomenon) when learning your native language is mixing up words that sound the same. Learning the rules can be tough and time consuming, and mistakes happen as often as misplacing une virgule (a comma). There are many homonymes that native French speakers often mix up or have trouble remembering when to use.

Compare them to three words that are often mixed up by English speakers:

Quand vient du mot latin (comes from the Latin word) quando and simply means when or at what time. In the English homonym comparison it’s most similar to there parce que (because) it can stand as its own word.

Quand arrivera-t-elle ?
When will she arrive?

Quant vient du mot latin quantum meaning an amount or quantity. Quant is always followed by la préposition “à”. It’s most similar to their in English, parce que it’s incomplete by itself. Their always has to be attached to a noun (their house, their ball) and quant will always have an à attached to it.

Quant à Jean, il va arriver plus tard.
As for Jean, he will arrive later.

Qu’en is a contraction of que and en. That makes it fairly similar to they’re parce que it’s a contraction that happens to be pronounced de la même manière.

Qu’en penses-tu ?
What do you think of it?

Quant aux homonymes, it’s important to remember ces fautes (these mistakes) can help you understand how native French speakers pronounce words and how they think of the sounds in context. Quand on voit (when you see) “Quant il pleut” it’s clear that the sound of the liaison influenced la faute. The “t” sound is natural in French in context. When spoken “Quand il pleut” sounds like “Quan til pleut”! Alors, qu’en pensez-vous ?