Hungry? You Need a Raclette. Posted by Josh Dougherty on Oct 8, 2017 in Culture

As I write this, my body is slowly recovering from the abuse I just put it through this evening. Don’t worry – I didn’t run a marathon or do anything crazy like that, but I did eat way more than I should have in the form of a traditional and delicious Swiss meal that’s perfect for those cold fall evenings.

Not that it’s cold in San Francisco at the moment. It’s quite the opposite, actually. We have an Indian summer, so our warm weather season is just starting. Anyway, that’s not completely relevant if you want to eat as I did this evening. This hearty meal you enjoy with friends around a little grill is actually perfect any time of the year. 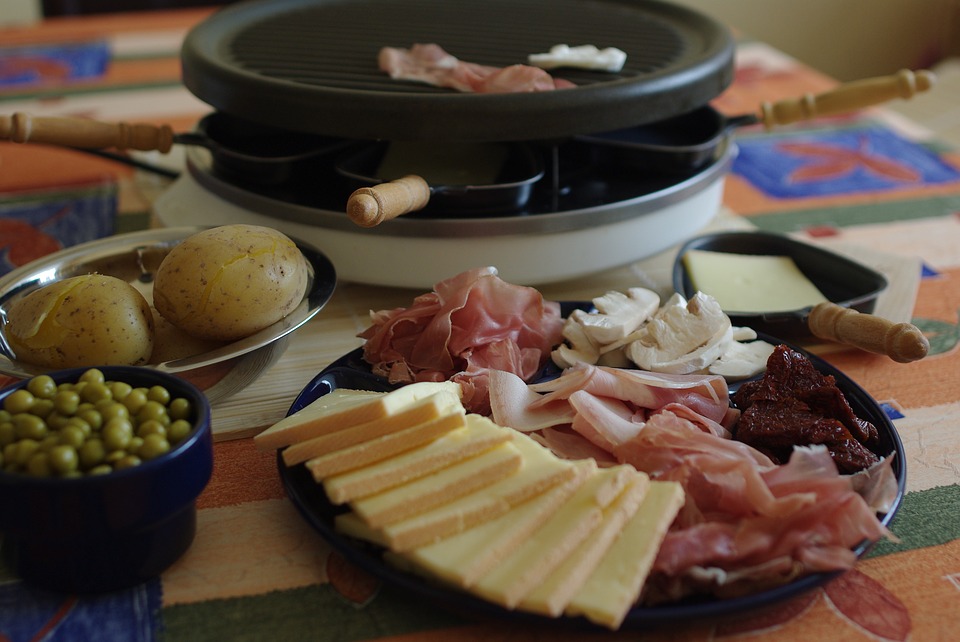 Raclette (which comes from the verb racler, to scrape) is a kind of cheese, but when the indefinite article is used (so, une raclette), it refers to the meal which is an entire social experience in and of itself. Melt the cheese and serve it over boiled potatoes, meats, vegetables, and fruits – and if you’re like I am, eat way too much of it and regret it later.

The popular dish dates back to the Middle Ages in the Valais region of Switzerland when cow herders would march into the mountains and, in the evenings, melt the cheese by their campfires and scrape the melted top off with bread. This tradition, sans the cows, has remained popular, and most French and Swiss families have their own raclette grill they pop out from time to time. Put it in the middle of the table, turn it on, and you have the start of a wonderful party. Pre-cut your meats and vegetables and have them in little dishes around the raclette grill within easy reach. A little wine and a light salad wouldn’t hurt, either.

What’s the difference between a fondue and a raclette? Both dishes can involve melted cheese (although a fondue can also refer to melted chocolate), but a fondue is served already melted pot so you can dip your foods. With a raclette, everyone has an individual pan to melt slices of cheese and heat up the other foods.

You can customize a raclette to your liking, but there are some staples that I’ve included below:

– du fromage (cheese – roughly 7-9oz per person). You can find Raclette cheese in most stores with a wide variety of cheeses

What do you like to have in your raclette?