Le Fromage: The World of French Cheese (Part 5) Posted by mtaulier on Jul 30, 2014 in Uncategorized

This is the last installment in our series on French cheese. I hoped you have learned a few facts you may not have known before and, most of all, I hope you will take the time to seek out some of these cheeses and experience them for yourself. You should be able to find them in specialty stores around your area.

Let’s turn the cheese tray to sink our teeth into two more cheeses, one of which you may already be eating.

Boursin is the newest member in the family of cheeses we’ve discovered so far. Created by François Boursin in 1963 in the Normandy region of France, Boursin has become one of the most popular French cheeses across the world. Go into any grocery store in the United States and you are likely to find some variation of Boursin. And that is one of the virtues of Boursin. It comes in many different flavors that appeal to a wide audience.

Made with cow’s milk, Boursin is unique in that it contains herbs, de l’ail, du persil et du poivre (garlic, parsley and pepper). It may also contains shallots, chives and even red chili pepper depending on the variety. As a testament to its versatility, besides its usual pairing with bread, Boursin can be added to dishes made with meat, soup, légumes et fruits de mer (vegetables and seafood). 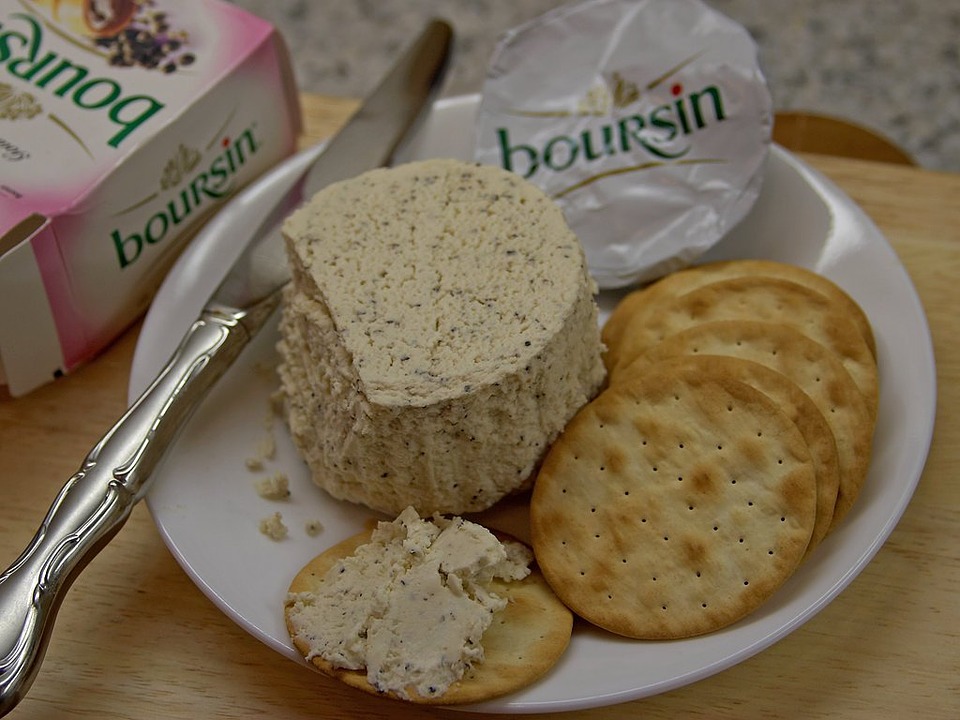 Unlike many other French cheeses, Boursin isn’t strong and has a very creamy texture that makes it easy to spread on bread or crackers. Boursin’s mild flavor explains its popularity among American audiences who may be averse to the much stronger French cheeses. Boursin has even earned its very own website where you can learn about the different varieties and try recipes containing the cheese.

Hailing from Normandy, just like Boursin, Pont-l’Évêque was created dans une abbaye (in an abbey) in Normandie somewhere around the 12th or 13th century. Originally named d’Angelot, the cheese took on the name of the village of Pont l’Évêque where it was produced around the 16th or 17th century.

A rich and creamy cheese made from either pasteurized or unpasteurized cow’s milk, Pont-l’Évêque has a light orange rind and is always shaped into un carré (a square). A full-bodied red wine can be paired with Pont-l’Évêque and the cheese is often melted to create a delicious, albeit rich, fondue.