Encouraging Birth in Israel Posted by Ayana on Jan 6, 2020 in Uncategorized 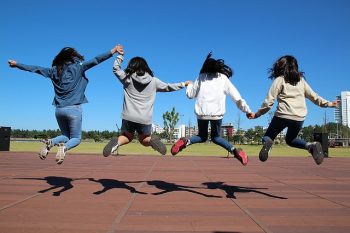 The average number of children per family (מִשְׁפָּחָה) in Israel is the highest among the OECD countries. An Israeli woman gives birth to three children (יְלָדׅים), on average.

A famous Hebrew song from the 70’s is called יְלָדׅים זֶה שׂׅמְחָה (Children is Happiness). The joyful tune made the song a hit. More than three decades after its debut, artists still perform the song on stage. Children is happiness, children are a blessing, and you have a heart of gold, as the chorus goes. The title became a common phrase in Israel. Dr. Eli Sagi, for example, named the parenting guide he wrote: Children is Happiness. A course on parenting at the Hebrew University of Jerusalem bears the same name. The song received several adaptations, and this one is my favorite:

The catchy hit was originally written for a theater show in the 70’s. The cheerful melody is deceptive, since the song is actually a protest song about a government which encourages destitute families to bear many children. Bring six, bring seven, bring eight children, it is not a joke, the country needs a lot of nice young people, as the second stanza goes.

Since a low fertility rate (שִׁעוּר פִּרְיוֹן) has negative implications for the country, combining an aging population with a reduced labor force, many countries encourage higher birth rates. In Israel, for example, a birth prize was once awarded during the early years of the state. The 100 Palestine Pounds prize was awarded to mothers with ten and more children. This was the personal initiative of Prime Minister David Ben-Gurion, who eagerly advocated encouraging childbirth (עִידוּד יְלוּדָּה). He even came to circumcision ceremonies. The controversial prize was canceled in 1959.

Nowadays, the National Insurance Institute pays a birth grant (מַעֲנָק לֵידָה) to every new mother, and a monthly child allowance (קִצְבַּת יְלָדׅים) to mothers with children up to the age of 18. The Institute also opens a personal savings plan for every child until they turn of 18. All of this is intended to help cover some of the expenses in raising children. The amounts are not high. The birth grant  for firstborn (בְּכוֹר) is 1,778 NIS. This is a small sum compared to the total expenses of a first childbirth. The pittance is reduced with the second child (800 NIS) and the third child (533 NIS).

Israel also provides generous funding of fertility treatments (טִיפּוּלֵי פּוֹרִיּוּת) for women up to age 45. Various fertility treatments are funded by the Israeli Ministry of Health for couples and single women. An Israeli woman, for example, married or unmarried, is eligible to an unlimited number of IVF treatment cycles until giving birth to two children. An Israeli woman, single or married, is also eligible to sperm donation. Apart from the purchase of sperm, the all process is financed by the Ministry of Health.

But many Israeli parents are not satisfied. They appreciate the financial assistance, but oppose the lack of supervised governmental care centers for kids under the age of three. The Israeli Compulsory Education Law (חֹוק חִינּוּךְ חוֹבָה) states that every child in Israel must enroll in an educational institution (kindergarten or school) from the age of 3 up to the twelfth grade. Toddlers under the age of three are unsupervised by the country. In Israel a paid maternity leave (חוּפְשַׁת לֵידָה) lasts only 15 weeks. Many households can’t settle for one salary, and most moms return to work, leaving their infants (תִּינוֹק) with a nanny or at a private daycare. Recent horrific cases of abuse revealed in Israel, aroused the ire of parents who demand government support not only in efforts to bring children into the world, but also to take care of them at least until the age of 3.