Hebrew Verbs in Action: Binyan pa’al Posted by Ayana on Feb 18, 2019 in Uncategorized

Hebrew verbs are composed of roots and verbal stems. The basis of every verb is the root, which is comprised of three letters. The verbal stems – the בּׅנְיָנׅים (bin-ya-nim) – are the patterns that shape the roots into actual words. בִּנְיָן (bin-yan) is a firm structure of prefix, suffix and punctuation, into which the root is inserted to form the verb. 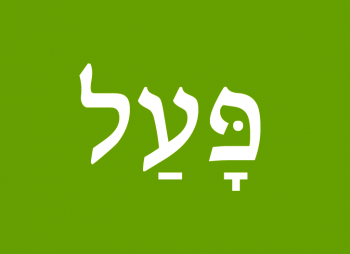 The Hebrew language has seven binyanim:

In the afternoon, he watched over his niece.

He ate dinner at a restaurant with friends.

Hebrew verbs conjugate according to the gender of whomever is performing the action. When the pronoun is feminine the verb will be conjugated as feminine as well. In past tense, the letter ה will be added as a suffix to the verb, making it a three syllable word. The first syllable vowel is still ‛a’, the second becomes ‛e’, and the third ‛a’. The root נ-ת-נ (n-t-n), conjugated as feminine singular in the past tense becomes נָתְנָה (na-te-na). For example:

In the winter she went on vacation.

She met her brother during her vacation.

The first pronoun, whether it’s masculine or feminine, receives the suffix תׅי (ti) in the past tense. The first two syllables keep the ‛a’ sound. For example:

I worked a whole year to save money for school.

After graduation, I finally went on vacation.

This also applies to the pronoun אֲנַחְנוּ (we). The first two syllables are pronounced with the ‛a’ vowel. The added suffix – נוּ (nu) for this pronoun – forms the third syllable. For example:

We ate lunch together.

We met your sister yesterday.

Hebrew has two different pronouns for ‛they’. One for females – הֵן. Another for males or a mixed group of males and females – הֵם.  Both of them function the same in the past tense of binyan pa’al. The first syllable maintains its ‛a’ sound. The second vowel changes to ‛u’ sound. 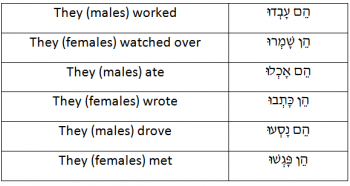 To summer the past tense of binyan pa’al I used the verb לׅכְתּוֺב (to write):

The conjugations in the present tense of binyan pa’al for every pronoun are more similar to each other. The first syllable receives the sound ‛o’ in every conjugation, the second becomes ‛e’. Some of the pronouns receive a suffix as shown with the verb לׅכְתוֺב in the following chart:

For more practice watch this video: