Israeli Woman who Crossed into Syria Returns to Israel Posted by Ayana on Mar 8, 2021 in Uncategorized 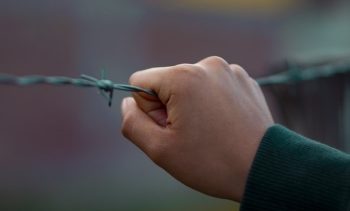 On October 5th 2020, during a state of alert along the Israeli-Lebanese border, an Israeli woman in civilian clothes was spotted right near the fence. Pictures of the woman in her twenties sitting alone in a civilian SUV, with an open window, smiling right to the Hezbollah camera, were shared in Lebanese social media. At the time, tension on the border was higher than normal, and the Lebanese reporter Ali Choeib, who proclaimed that the road is inaccessible by civilians, mocked the Israeli army for sending a female solider in civilian clothes to scan the military road.

According to the Israeli media, the woman was spotted on a road accessible to all, but due to the tension between the countries at that time, a military officer who noticed her asked her to leave the area.

Several days later, the woman posted in her Facebook account a picture of her in the Palestinian city Jericho, to which Jewish Israeli citizens are not permitted to enter, alongside the text:

Her Facebook account was opened on August 2020, only two months before she drove along the Lebanon border. It was a Facebook profile she used as a platform to publish her ideology. She didn’t post chronologically and didn’t share daily personal life details. Every couple of days, she posted together a bunch of pictures from different locations and different dates, writing her thoughts and short poems next to each picture. In the pictures she is diving, skydiving, jumping into springs, and travelling all around the country, including places under Palestinian authority. A picture of her posing with Arab children got the caption: הֵם לֺא בְּנֵי דּוֺדׅים הֵם אַחִים (they are not our cousins, they are our brothers). Another picture of her with local children in Jericho was followed with a short text:

When people “close” to me

Warn me against an enemy

Who gives me his hand

While they give me the boot

I believe only what my eyes see

Not what my ears hear

Four months later the same Israeli woman crossed into Syria. At the beginning of February, during a rainy stormy weather, she crossed the border undetected, leaving no evidence of her breach. The woman made her way to a Syrian village, and began speaking with the locals. The locals reported her to authorities, and she was arrested and taken for questioning by Syrian intelligence officers. Soon after it became clear that she is not a spy, a negotiation for releasing the woman began. The Israeli woman was taken to Moscow, and Russia brokered a prisoner exchange between Israel and Syria.

The incident was kept under a strict gag order for two weeks. On February 16th, news reports revealed that senior officials from both Israeli and Russian governments had held frequent talks in recent days about a humanitarian issue related to Syria. The next day, details of the swap deal to bring the woman home were published. Israel agreed to release two Syrians convicted of terrorism-related offenses. Many in Israel criticized releasing terrorists for a woman who crossed the border voluntarily. An Israeli reporter, for example, asked on live stream:

Why the State of Israel has to jump through hoops, and to release terrorists for this lady?

The two Syrians, however, refused to be transferred to Syria. They preferred to continue serving their sentence in an Israeli prison and remain in their hometowns in the occupied Golan Heights. אֲנִי לֺא מִתְכַּוֵּנֶת לַעֲזוֹב אֶת מוֹלַדְתִּי וְאֶת בֵּיתִי (I’m not going to leave my home and my country), announced one of the prisoners. Eventually, Israel repatriated two Syrian shepherds who entered Israeli-controlled territory a few weeks ago.

Watch the item from February 18th:

The swift and easy deal between the two enemy states, and the rapid replacement of terrorists by trespassers, seems suspicious. Two days after the publication, the woman landed back in Israel. Part of the deal, announced the Israeli news, remain censored. On that day, the Arab-Israeli politician Ahmad Tibi tweeted:

Last week, I raised a demand in the Knesset to transfer vaccines to Palestinians in the West Bank. Do we have to wait for a Jew to cross the border into Gaza to be vaccinated?

Foreign media indeed approved Tibi’s hint. Israel had in fact agreed to a far more contentious ransom. Israel paid Russia, which mediated the deal, millions of dollars to send its Covid-19 vaccines, the Sputnik V vaccines, to Syria to facilitate the swap. When an Israeli reporter confronted Netanyahu with the reports he remained coy: “Not even one Israeli vaccine went to this thing, and more than this I won’t add because that was the Russian request.” He thanked President Putin again, as he did in an official video:

Another suspicious factor in the story is the fact that the gag order, which hasn’t been removed yet, also includes the identity of the woman. According to foreign media the 23 years old woman come from an orthodox family in the Haredi city Modi’in Illit. Although no source in Israel confirmed it, yet many in Israel believe the woman is somehow related to an orthodox politician, or a leading Rabbi, who demanded action on her behalf. Which led to a raid deal and an expensive compensation.