Landmines in Israel Posted by Ayana on Apr 22, 2019 in Uncategorized 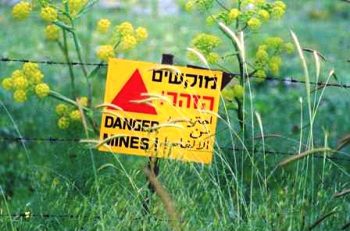 More than one million mines (מוֹקְשִׁים), anti-personal and anti-tank, are concealed under the ground of Israel. They were laid over the years by the armies of Israel, Syria, Jordan and Egypt mostly along the borders of Israel, but also near military camps and training areas. The IDF maintained some of them to protect the country from raids (פְּשִׁיטָה), but many of them are no longer needed. They are very dangerous, given that landmines remain operational many years after being buried. Some of them even get carried out of the fenced off (מְגֻדָּר) minefield by the rain and snow melt.

One such landmine changed the life of Daniel Yuval. On the first Saturday of February 2010, the weather was nice and many Israelis travelled all the way to the north to enjoy the fresh snow covering the Golan Heights. The Yuval family and other visitors played in the snow on the foot of Avital Mountain overlooking the nearby warning signs. Daniel, only 11 years old, was intrigued by the sparkling ice crystals on a rock. He ran to the rock, when suddenly an explosion went off. Daniel’s legs were injured and he lost his right foot.

The Israeli news of that day reported on the incident:

Although injured, Daniel didn’t waste time. Soon after the injury, he joined activist organizations advocating the worldwide clearance (פִּנּוּי) of landmines to prevent innocent casualties (נִפְגָּעׅים). In November that year, he spoke at the UN in Geneva. A couple of months later, he sat next to Israeli Prime Minister Benjamin Netanyahu in a governmental committee meeting. Daniel’s efforts bore fruits and a year after his injury, the law to establish a national authority (רָשׁוּת) for clearing mines that are not required for security (הֲגָנָה) purposes was approved unanimously (פֶּה אֶחָד).

The following year, the new Israeli Mine Action Authority began its work. It demined hundreds of landmines in the Arava Valley, West Bank, and Golan Heights. Unfortunately, it’s only a drop in the ocean (טִיפָּה בַּיָּם). In the south of Israel, for example, mines laid by the IDF decades ago to prevent infiltration (חֲדִירָה) are still endangering hikers. And it’s getting worse over the years due to winter floods that expand the areas suspected as mined (מְמֻקָּשׁ). It will probably take many years but hopefully Israel will eventually be free of mines.