The Definite Article Prefix Hey Hayedia Posted by Ayana on Jun 26, 2017 in Grammar 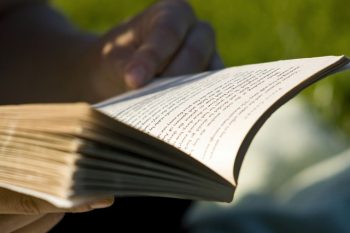 Reading by Sam Greenhalgh on Flickr.com

In Hebrew, nouns are made definite by adding the prefix ה. This prefix is called ה’ הַיְּדׅיעָה (hey hayedia) and functions like the definite article ‛the’ in English. The word עִיתּוֹן (newspaper), for example, indicates any newspaper; while the word הָעׅיתּוֹן (the newspaper) refers to a specific newspaper. Here are some rules for the use of ה’ הַיְּדׅיעָה:

1) An indefinite noun becomes definite after it has been mentioned. For example, if someone tells his friend: אֶתְמוֹל קָרָאתׅי סֵפֶר (I read a book yesterday), the word ‛book’ does not refer to a specific book, hence does not take the definite article. But if this someone continues his story and the word ‛book’ is referred to again – for example in a sentence like: הַסֵּפֶר הָיָה מְעַנְיֵין (the book was interesting) – it is now specific and must take the definite article.

So it will be in this short conversation:

2) Nouns become definite even without being mentioned earlier in the conversation. The noun is definite when it refers to a specific person/object/place, known to those participating in the conversation. For example, if two Israelis discuss the economic situation, and then one of them says: הַנָּשׅיא הׅכְרׅיז עַל שׁׅינוּיׅים צְפוּיׅים (the president declares upcoming changes); the word ‛president’ is definite because they both know the speaker refers to the president of Israel.

Another example, if a couple of tourists discuss the sites and bites of Jerusalem, and then one of them says: הַשּׁוּק נֶהְדָּר (the market is wonderful); the word ‛market’ is definite because it well understood that the market he mentioned is the market of Jerusalem.

If a book starts with the sentence: בּוֹקֶר אֶחָד נׅשְׁמְעוּ דְּפׅיקוֹת חֲזָקוֹת (strong knocks were heard at morning). In the following sentence: אׅימָּא פָּתְחָה אֶת הַדֶּלֶת (mom opened the door), the word ‛door’ is definite, because it is clearly refers to the specific door of the kid and his mom’ apartment.

3) An indefinite noun is transformed to definite and specific when joined by the possessive particle שֶׁל (of). When שֶׁל is in its basic form, most of the nouns preceding it and following it should be in the definite form. For example, in the sentence דָּוִד הוּא מוֹרֶה (David is a teacher), the word ‛teacher’ is indefinite. But in the sentence דָּוׅד הוּא הַמּוֹרֶה שֶׁל טַל (David is Tal’s teacher), the word ‛teacher’ is definite.

5) Proper nouns – like: Daniel, Tal, Tel-Aviv, Israel – will never take the definite article since they already definite by their very nature. The same is true for pronouns – like: הוּא, הׅיא, הֵם, (he, she, they) etc.

In contrast to the construct state, when a combination of a noun and its modifying adjective is made definite, the hey haydia definite article prefix will precede both the noun and the adjective. For example: הַתַּחֲנָה הַמֶּרְכָּזׅית (the central station).

A little prefix that makes a big difference. It’s a little bit confusing, but don’t worry! Try to practice it every day: one rule of hey hayedia a day. And read a lot, especially children books, in which the sentences are short, clear, and grammatically correct. בְּהַצְלָחָה (Good luck)!