Current Events in Hindi Posted by Rachael on Jul 6, 2018 in Hindi Language, Uncategorized

If you’re stuck for a way to up your Hindi game or just want to refresh your existing knowledge, reading the news in Hindi is a great way to go. BBC Hindi is just one of many websites that offers extensive and timely coverage of current events in India and abroad, all in Hindi, of course. Reading the news in the language you’re trying to learn is also a good way to multitask: not only will your general reading skills and vocabulary improve, but you will also enhance your current knowledge on Indian culture and events and issues pertinent to India (भारत/Bhaarat or इंडिया/India) and elsewhere (विदेश/videsh)! 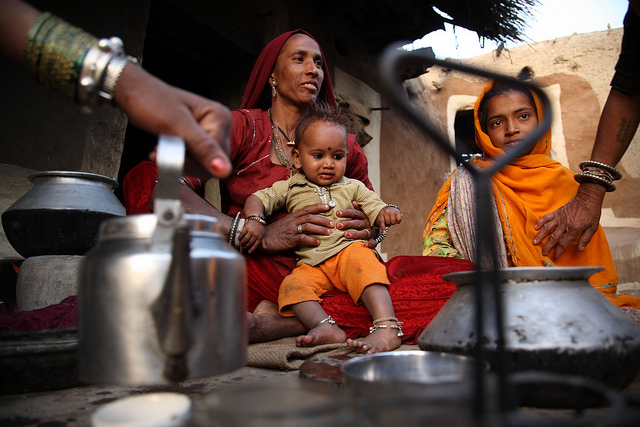 One recent article that I came across discusses the drastic deficiency in women’s vitamin D levels in India, or भारतीय महिलाओं में विटामिन-डी की कमी/Bhaaratiya mahilaaon me vitamin D ki kami. The article begins with a few shocking statistics: about 69% (६९ प्रतिशत/pratishat or फ़ीसदी/feesdee) of women living in North India (उत्तर भारत/Uttar Bhaarat) suffer from a lack (कमी/kami) of vitamin D. In addition, only 5% (५ फ़ीसदी/feesdee) of women possess vitamin D in adequate levels (सही मात्रा/sahee maatraa). The author of the article, Saroj Singh (सरोज सिंह), adds that doctors from several of India’s major hospitals have contributed to this research (शोध/shodh) on large swaths of Indian women suffering from a lack of vitamin D. For those who are unaware, the most widely known and potent source of vitamin D is from the sun (सूर्य/surya or धूप की किरणें/dhoop ki kirane = “the sun’s rays”), and this vitamin is important not only for maintaining healthy bones (स्वस्थ हड्डियाँ/svasth haddiyaan) but also to bolster your body’s immune system (प्रतिरोधी तंत्र/pratirodhi tantra or “counter-attack system,” literally) against disease and other harmful factors.

Subsequently, the author of the article and the doctors who conducted the study list some reasons that women in particular may be more affected by this issue than men. The first is that women, in general, spend more time completing tasks around the house (घर के कामकाज/ghar ke kaamkaaj) than men and thus are outside less and have less opportunity to soak up the rays (धूप का सेवन करना/dhoop kaa sevan karnaa or “to avail themselves of sunlight”). Realistically speaking, this seems like a reason (वजह/vajah) that would be more valid in more traditional parts of the country, such as villages (गाँव/gaanv) and small towns (छोटे शहर/chote sheher), where gender roles dictating women’s work in the home are more prevalent. Numerous women in India today work full-time jobs in offices or otherwise outside of the home, especially in the major metropolises of India, alongside their male counterparts.

Another reason advanced by the author for the vitamin D deficiency in Indian women is that they tend to wear clothing that covers most of their bodies (कपड़ों की वजह से, शरीर का हर अंग ढका हुआ है/kaparo ki vajah se, sharir ka har ang dhakaa huaa hai), which inevitably restricts the skin’s exposure to the sun’s rays. While it’s true that Indian women, especially in more traditional areas, are expected to wear modest clothing such as saris (साड़ी) and salwar-kameez (सलवार-कमीज़) or “suits” (सूट), men also wear modest clothing that includes long tunics (कुर्ता/kurtaa) and Western business attire, replete with trousers and long-sleeved shirts. So, this doesn’t seem to be an entirely valid reason that may explain why women, suffer in greater numbers from a vitamin D deficiency. 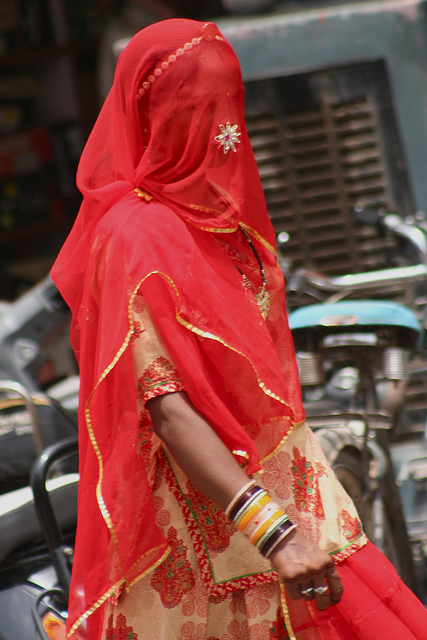 Modest dress especially common in more traditional societies, which urge women to drape their घूँघट/ghoonghat or veil over their faces while in public or in the presence of unrelated men, may be contributing to women’s vitamin D deficiency. Image by Kandukuru Nagarjun on Flickr, licensed under CC BY 2.0.

One detail that the author does not bring up, however, is that women, especially in North India, often go outside outfitted in gear intended to protect their skin from sun exposure. In Rajasthan, for example, this gear can include cotton gloves that extend all the way to the top of one’s arms and large handkerchiefs that are wrapped around the head, mouth and chest to restrict sun exposure for the purpose of attaining a “beauty ideal” or सुंदरता का आदर्श/sundartaa kaa aadarsh (that is, fairness or गोरेपन/gorepan). As the picture at the top of the article indicates, this type of gear does indeed restrict sun exposure but, it appears, it may be at the cost of women’s health (सेहत/sehat or स्वास्थ्य/svaasthya). Although men in semi-arid or arid regions, where dust is prevalent, also wear handkerchiefs around their mouths and faces, they do so primarily for the purpose of avoiding dust inhalation and less for the purpose of attaining a certain skin tone. Perhaps a continuation of this article could probe the extent to which unreasonable beauty standards harm women’s health especially.

Yet another reason that women could be particularly affected by this deficiency is the hormonal fluctuations (हॉर्मोनल बदलाव/hormonal badlaav) that women experience at various stages of their lives, such as those that occur during and after menopause and while a woman is breastfeeding (बच्चे या बच्चों को दूध पिलाना/bacche yaa bacchon ko doodh pilaanaa). Moreover, a fourth reason (चौथी वजह/chauthi vajah) is provided with a quote from Pranab Mukherjee’s (the former President of India) physician, Dr. Mohseen Vali (डॉक्टर मोहसीन वली), who pinpoints one of the causes of the deficiency to be the use of “refined oil” in cooking (खानें में रिफाइंड तेल का इस्तेमाल/khaane me refined tel kaa istemaal). Yet, this reason also seems inadequate, because even if refined oil is bad for one’s health, due to its high level of trans fats and the fact that is decreases the number of cholesterol molecules used to create and process vitamin D in one’s body (according to Dr. Vali, डॉ. वली के मुताबिक़), both women and men are eating more food with refined oil rather than more traditional (and healthier) alternatives such as घी/ghee (clarified butter) and सरसों का तेल/sarson kaa tel (mustard oil). Thus, both women AND men should be experiencing higher rates of vitamin D deficiency if this is really a major reason for the “epidemic” (महामारी/mahaamaari) of vitamin D deficiency, as some are calling it. 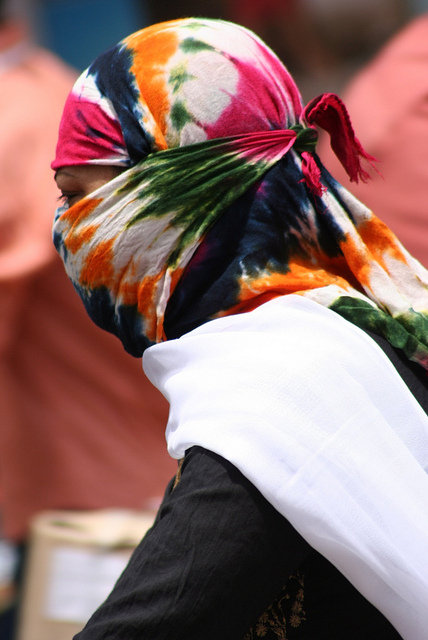 A solution for the dust while on a two-wheeler (scooter), but one that may have unintended consequences. Image by Kandukuru Nagarjun on Flickr, licensed under CC BY 2.0.

Although the effects of a vitamin D deficiency are usually not evident immediately, they manifest over time, especially as we age and, due to this deficiency, have greater pain in our joints and muscles and greater risk (ख़तरा/khataraa) of bone fracture (हड्डियों के फ़्रैक्चर/haddiyon ke fracture). Vitamin D deficiency has these effects because it interferes with the body’s absorption of calcium (शरीर में कैल्शियम सोखने की क्षमता/shareer me calcium sokhne ki kshamataa) which is important for maintaining strong and healthy bones. If you suspect you may have a vitamin D deficiency, the best thing you can do is see a doctor, who may recommend that you spend more time in the sun (an hour a day will do, एक घंटे तक धूप में रहना/ek ghante tak dhoop me rehnaa), eat more foods with vitamin D (such as cooked egg yolk/अंडे का पीले वाला हिस्सा/ande kaa peele vaalaa hissaa or अंडे की ज़रदी/ande ki zardi) and certain kinds of fish/ख़ास प्रकार की मछली/khaas prakaar ki machlee) and take vitamin D supplements––all solutions (उपाय/upaay) offered by this article.

Although we may not agree with everything that a news article reports, it’s good for engaging our critical thinking skills and, in another language, it improves our cultural and linguistic knowledge. So, I urge you to tackle a Hindi news article some day this week––you’ll be surprised how much you learn!