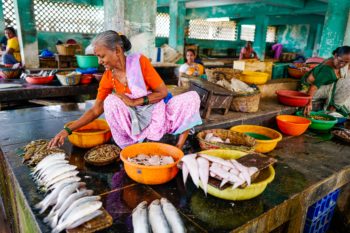 Photo by Ishay Botbol from Pexels

The Kolis are one of Mumbai’s oldest communities सबसे पुराने समुदाय living in Koliwadas. Their industry उद्योग which is fishing is instrumental in determining निर्धारण में सहायक the coastline of Mumbai. There was another एक और community that flourished निखरा back in the day. These natives communities मूल निवासी समुदाय are called the Gaothans.

This post will take a look at not only the Koliwadas कोलीवाड़ा but also the Gaothans गौथान्स around Mumbai. There are 128 Gaothans and 36 Koliwadas at present in Mumbai. Mumbai natives look upon them as heritage विरासत communities.

Hamlets and Farms by the Sea

The Kolis live in Koliwadas which are tiny hamlets छोटी बस्तियां located close to the Arabian Sea. These small bungalows छोटे बंगले were constructed during the time of the Portugueseपुर्तगाली  in India. In the 15th and 16th centuries the Portuguese gave up islands in the south of Mumbai for fertile farm lands in the north. These spaces grew from Vasai, all the way to Bandra and Mahim. But according to one of the Koli fishermen, their history इतिहास goes back 2000 years.

Muslims, Hindus, and Christians live together साथ साथ in these communities. They speak the Koli dialect Agri. They also communicate संवाद in Mumbai Hindi.

A Gaothan (Gao = village, than = site) is land that originally प्रारम्भतः housed the residents who worked in the rice paddies चावल की धान all over Maharashtra. The rice paddies were situated on low नीच flatlands while the Gaothans were located स्थित on higher land. These villages have well-documented histories and are marked with churches गिरजाघर or temples. The bungalows are old पुराना but now considered heritage properties.

The early ’70s saw a rise वृद्धि in population in the urban शहरी areas of Maharashtra, especially Mumbai. As a result, many high-rise buildings इमारतों replaced the Gaothans.

The restaurants भोजनालय and retail establishments sprung up all over bringing traffic यातायात and annoyances. Bright shiny shops replaced some of the quaint front doorways दरवाजे.  The nostalgic owners of these bungalows-turned-flagship-stores struggle to keep the ambiance माहौल of their beloved Gaothan.

To add insult अपमान to injury, the Brihanmumbai Municipal Corporation proposed to designate these Gaothans and Koliwadas, the status स्थिति of a slum. This proposal has not been taken well by the owners मालिक. This is because they pay taxes just like all residents of Mumbai. Also, they have historic land agreements ऐतिहासिक भूमि समझौते, some dating back to 1857.

These hamlets were built by low caste laborers in rural areas initially because they could not afford the expensive land areas in South Mumbai. Upper caste Catholic converts built the heritage bungalows with sloping Mangalore tiled roofs and large balcaos, largely influenced by Portuguese architecture.  The typical Gaothan or Koliwada has grottos, churches and crosses besides these bungalows. Today, many of these bungalows house big brand names of fashion apparel and home decor.

Where are they today?

Today, the Gaothan and Koliwada are surrounded घिरे by glitz and glamor. Mumbai airport and large विशाल malls have come up in some areas. The residents have seen their livelihoods रोजी रोटी shrink and to survive they add floors to original structures मूल संरचनाएं, renting them out.

Residents are campaigning चुनाव प्रचार to keep the simplicity intact, arguing that the infrastructure will not support सहयोग a concrete jungle. The Kolis organize seafood festivals, while groups are calling for the return of lands to the original owners. Our hope आशा is that the government takes notice and preserves while restoring these pieces of history and culture.