South Asia Shines on The Great British Bake Off Posted by Rachael on Nov 26, 2018 in Hindi Language

Some of you may be familiar with the wildly popular (लोकप्रिय/lokpriya, adj) British show, The Great British Bake Off (or, as it’s known in North America, The Great British Baking Show), which has achieved even greater fame (प्रसिद्धि/prasiddhi, fem. or शोहरत/shohrat, fem.) since it was released in the US and Canada.

Unlike most “reality competition” shows, in this show the contestants (प्रतियोगी/pratiyogi) are shown to behave amiably with one another, even helping another baker when he or she is struggling to finish a bake on time and/or has endured a “baking catastrophe.” Interestingly, a number of South Asian contestants have competed on the show and even won the competition (प्रतियोगिता/pratiyogitaa, fem. or मुक़ाबला/mukaablaa, masc.). These contestants and their bakes are a testament to the inextricable cultural ties (सांस्कृतिक संबंध/saanskritik sambandh, masc.) between Britain and South Asia. After all, food is one of the most fundamental ways in which people express love (प्यार/pyaar, masc.), affection (स्नेह/sneh, masc.) and creativity (रचनात्मकता/rachnaatmaktaa, fem.) as well as display their own culture. The prevalence of South Asian flavors in England today, where “chicken tikka masala” is considered the country’s de-facto national food (राष्ट्रीय भोजन/raashtriya bhojan, masc.), is of course proof of the intertwined nature of these cultures and their shared history. Below, I’ll discuss the two South Asian winners of the show. 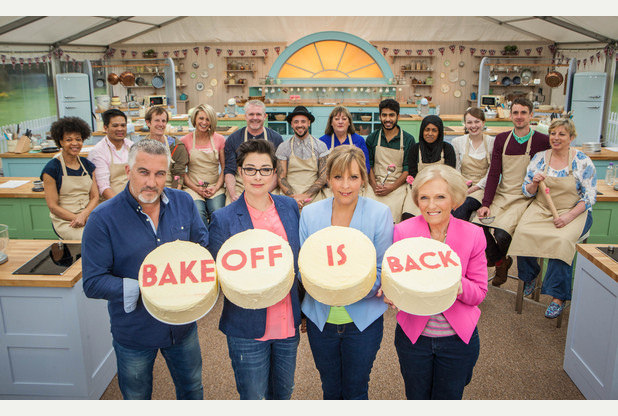 The judges and presenters of The Great British Bake Off in front, the baking contestants in the back (Nadiya can be seen fourth from right). Image by Erika Herzog on Flickr, licensed under CC BY 2.0.

Nadiya Hussain is perhaps the most famous (मशहूर/mashoor) South Asian baker on the show, having won the 2015 title of the best amateur baker in Britain. This title was awarded to her by the show’s judges: Paul Hollywood, a celebrity chef who is especially renowned for his expertise (विशेषज्ञता/visheshagytaa, fem.) with bread and Mary Berry, a prolific cookbook author and television presenter. Nadiya started off the show with little confidence despite her innate talent (सहज प्रतिभा/sehej pratibhaa, fem.) in the kitchen. Initially, she failed some “technical challenges” that are designed to test a baker’s store of knowledge around the technical aspects of baking through the “surprise” element of each assigned bake, its technical complexities and the lack of preparation afforded the bakers, who are generally able to practice (अभ्यास करना/abhyaas karnaa, verb) their bakes ahead of the competition weekend. Fortunately, though, another of the unique aspects (अनोखा पहलू/anokhaa peheloo) of the show is that the bakers start off each successive week more or less with a clean slate in that the judges usually only consider their performance during that weekend in deciding whether or not they should advance in the competition. 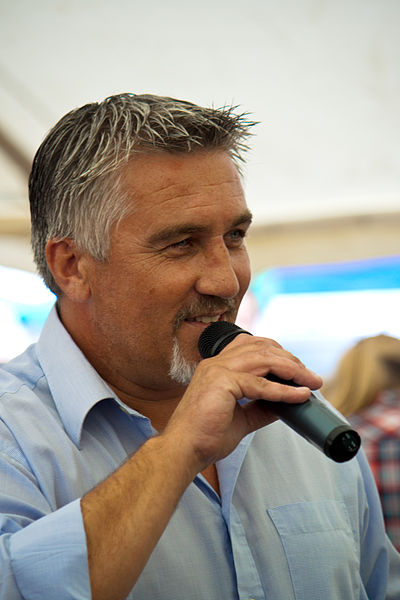 Paul Hollywood, one of the judges on the show. Image by Tim Fields on Wikimedia Commons, licensed under CC BY 2.0.

As the show progressed, however, Nadiya became more confident (आत्मविश्वासी/aatmavishvaasi) in her skills and continually impressed the judges with her creativity and bold use of flavors. A 2nd-generation British Bangladeshi, Nadiya sometimes used Bengali flavors (बंगाली स्वाद/bangaali svaad, masc.), some of which were inspired by family recipes, combined with British flair to produce complex and vibrant flavors and creative baking masterpieces that demonstrated her love of Bengali culture. Some of her greatest bakes include a cobra constructed entirely of bread, a peacock sculpture made of chocolate and a multi-tiered showstopper cake, which she jokingly referred to as “My Big Fat British Wedding Cake,” adorned with her wedding jewelry (शादी के ज़ेवर/shaadi ke zevar, masc. pl) and sari (साड़ी, fem.). Nadiya is now a successful (सफ़ल/safal) TV chef, presenter and author with a large fan following who appreciate her down-to-earth personality, openness about and advocacy of mental health awareness (she suffers from panic disorder) and proud visibility as a hijab-wearing Muslim woman. 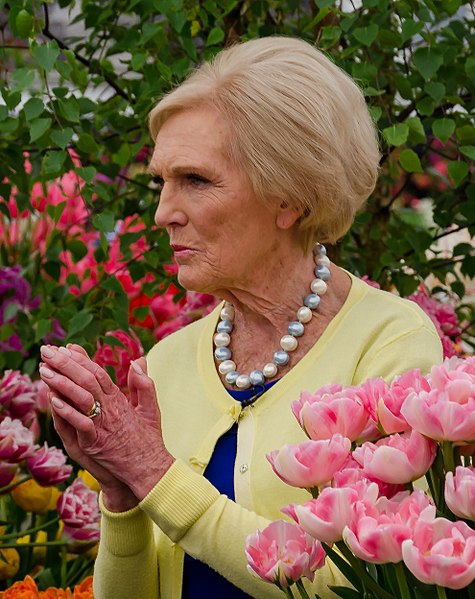 Mary Berry, a former judge of The Great British Bake Off; when she moved on to pursue other projects, she was replaced by Prue Leith, an English restauranteur, chef, TV personality and food writer. Image by Stephen Reed on Wikimedia Commons, licensed under CC BY-SA 2.0.

Rahul is the most recent (हाल का/haal kaa, adj.) winner of the 2018 season of The Great British Bake Off, consistently stunning the judges’ with his vibrant use of flavors, skill at ornate decoration and baking finesse. Originally from Howrah, West Bengal, Rahul traveled to England to pursue a PhD in Optical Metrology at Loughborough University and took up baking when his “adoptive British parents” encouraged him to find a hobby (शौक/shauk, masc.) to occupy his time. In interviews, Rahul says that baking helped him make new friends in an unfamiliar place and served as an antidote to his shyness and feelings of homesickness (गृहासक्ति/grihaasakti, fem.).

It wasn’t long before fellow contestants and fans of the show were charmed by Rahul’s shyness (शर्म/sharm, fem.), naiveté (भोलापन/bholaapan, masc.), penchant to talk incessantly (बातूनी/baatooni = talkative) and self-deprecating modesty (विनम्रता/vinamrataa, fem.), despite his formidable talents in the kitchen. During the course of the show, Rahul won (जीतना/jeetnaa, verb) the title of “star baker” (the star amongst that week’s “batch” of bakers in all three challenges) a number of times. Amongst his most memorable (यादगार/yaadgaar, adj.) bakes were an extraordinary dessert enrobed in a melting chocolate sphere, an intricate bread sculpture suitable for a wedding called a “korovai,” a baked delicacy that hails from Eastern Europe, and an edible landscape. Today, in addition to his work (पेशा/peshaa, masc. = profession or नौकरी/naukri, fem.= job) as an engineering researcher at the University of Sheffield, he serves as a columnist for The Times Magazine, as does Nadiya, and appears occasionally to cook on the show This Morning. 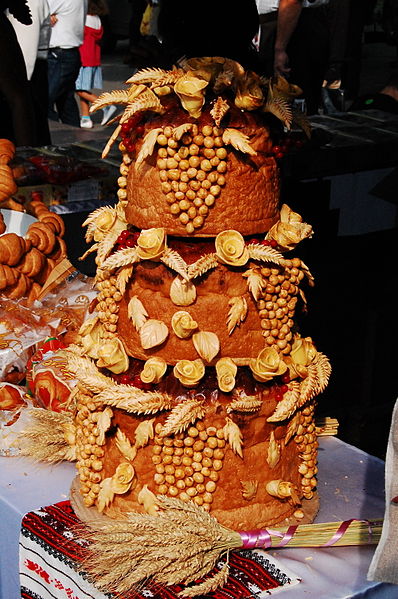 In addition to these winners (जीतनेवाले/jeetnevaale), there have been many other contestants of South Asian origin who have competed and attained success on The Great British Bake Off. Other contestants, as well, have demonstrated just how intertwined the cultures of South Asia and Britain are by the sheer prevalence of South Asian flavors in British food today, from the alternately crispy and chewy texture of naan (नान, fem.), the delicate flavors of rose water (गुलाब-जल/gulaab jal, fem.) and cardamom (इलायची/ilaaychee, fem.), the addictive taste of gur (गुड़ = a type of cane sugar, masc.) to the crunchy, spicy, fried glory of samosas (समोसे, masc. pl) and kachoris (कचौड़ी).